Journalists who do not appreciate and understand Kamala Harris’ life experience is now being on the list according to a new profile of the vice president.

The Atlantic journalist revealed that Harris went further, and kept records of reporters who displeased her.

“The vice president and her team tend to dismiss reporters. Trying to get her to take a few questions after events are treated as an act of impish aggression,” Edward-Isaac Dovere wrote. “And Harris herself tracks political players and reporters whom she thinks don’t fully understand her or appreciate her life experience.”

One example of that, Dovere was told, was how Harris often mentions when a Washington Post reporter mistook the cheer of the historic Black sorority Alpha Kappa Alpha for “screeches.”

Vogue magazine employees likely are on Harris’ list, according to The Atlantic story, after putting her on the cover of its February issue. A photo used was not what both sides had agreed upon, her team said.

Janes in 2019 attended a Harris campaign event where Harris’ sorority greeted her with their distinctive cheer, which Janes described as ‘screeching’. 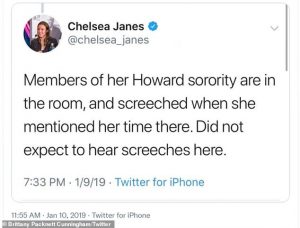 ‘She often mentions an episode in which a Washington Post reporter mistook the cheer of the historic Black sorority Alpha Kappa Alpha for “screeches,” I was told,’ the reporter wrote.

‘She particularly doesn’t like the word cautious, and aides lookout for synonyms too. Careful, guarded, and hesitant don’t go over well.

‘But she continues to retreat behind talking points and platitudes in public and declines many interview requests and opportunities to speak for herself (including for this article).

‘At times, she comes off as so uninteresting that television producers have started to wonder whether spending thousands of dollars to send people on trips with her is worthwhile, given how little usable material they get out of it.’

Harris, who was a senator for California before she became president, has long had a reputation as being cagey around the media – unlike Biden, whose garrulousness is legendary. Once he became a serious presidential contender he toned that down, under pressure from his aides, and granted very few interviews on the campaign trail.

In September her team was forced to bat away a story that she had not taken any formal questions from the press since she was named as Joe Biden’s vice-presidential pick, over a month previously. Harris had spoken to local media and some digital outlets such as The 19th, focusing on women, and The Grio, focusing on black issues.

She had not, however, held formal press sessions, according to a Reuters fact check.

The Atlantic reported that Harris, unlike Mike Pence and Biden before him, would not come to chat with reporters while flying with them on Air Force Two.

Harris’s friends, the magazine said, also found her aloof – the vice president was given a new cellphone on taking office, and her old friends have struggled to contact her.

‘They often can’t get through,’ the magazine said.

One Twitter user likened her to Richard Nixon, who famously kept lists of his enemies.

Another wondered whether she was going to set the FBI on them.