Liberal media has been portraying refugees in the light that best fits their political agenda.

The media is using cropped and edited photos to make American’s feel bad about the refugees and spin it to play on the heart strings of millions. Of course they won’t report the whole truth because of their bias. We’re here to show you the actual truth. Below is the cropped photo that the media uses. 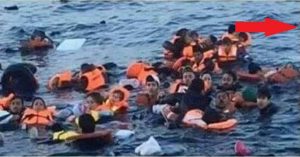 How sad does this look? Men and women floating in water, who knows how deep it is. They need our help! right?? Check out the whole photo, the part they cropped below.

See that guy STANDING in the back? Yeah, that’s only a few feet of water. They tried to make it seem like they were floating in deep water. This is just completely false.

There’s a video floating around online also that show’s Syrian refugees. It’s not the sad picture of mostly women and children that the media spreads. It shows that the majority of the refugees are young men. On top of this, they completely reject the help and supplies that were being given to them. Watch below…

This is why we don’t want to accept just any “refugee” into America! Why would we put our families in danger with American hating terrorists? Do you want terrorism and war right here in your backyard?

Share this story and spread the news to those who aren’t informed on what the media hides.