For the past three years, Democrats in the House of Representatives haven’t done a single constructive thing. All of their efforts were focused like a laser on obstructing President Donald Trump any way they could, even if it meant an illegal coup attempt. Now that President Trump’s defense team has proven that impeachment was nothing but another attempt to hijack an election, House Democrats started thinking about their own chances in November. That’s when they decided they better act like they’re doing something.

One of the things that they have been neglecting while they wasted everyone’s time with a kangaroo court is approve a highway budget. They can’t figure out how much to spend on the roads until they decide what they’re going to do about all the crumbling infrastructure. President Trump has been making suggestions, proposals and clearing the way on regulations since the day he was sworn in — and couldn’t get anyone to listen, but now suddenly, Democrats have a sense of urgency. 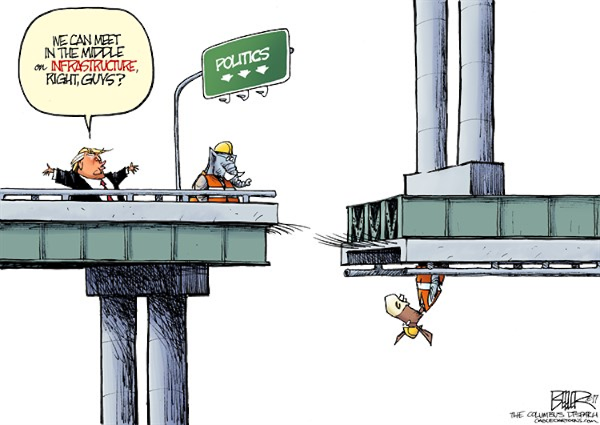 On Wednesday, Nancy Pelosi dropped a $760 billion infrastructure package on the table. Over five years, she wants to “rebuild sagging roads and bridges” while reducing “carbon pollution” at the same time. “There’s so many ways we can deal with the climate crisis by solving our congestion and infrastructure crisis,” Representative Peter DeFazio believes. He chairs the House Transportation and Infrastructure Committee.

Democrats say their spending plan is “intended to get U.S. President Donald Trump to return to the bargaining table,” Reuters reports, but they don’t have a clue how they will pay for it yet. They insist they will cross that bridge after they build it, with help from President Trump. According to Reuters, “Democrats said they did not want to discuss how to pay for the improvements until they reached a deal with the White House. House Speaker Nancy Pelosi said they would vote on a plan ‘when we’re ready.'” The White House “declined to comment.”

Trump campaigned on the idea of investing at least a billion over the next decade directly on infrastructure. Last year, Trump agreed to invest up to $2 trillion before the meetings were canceled by congressional investigations.

The new scheme cooked up by the Democrats would “spend $329 billion over five years on surface transportation, with a focus on fixing the 47,000 structurally deficient U.S. bridges.” Another $1.5 billion would go to “support the development of an electric vehicle charging network.” Democrats want to throw $105 billion at transit, $55 billion at rail spending and $30 billion at airport investments. They would also dedicate $86 billion to expand internet access.

Congress is having a hard time scraping up the money since they keep sending it all overseas. They know better than trying to stick the taxpayers with another gasoline tax. They’ve tried that before and it didn’t go over real well. “Congress abandoned the practice of largely requiring road users to pay for road repairs and has not hiked the federal gas tax since 1993.”

In order to pay for their proposal, Congress needs to shake another $107 billion out of the couch cushions over the next five years.