Protesters better watch out because a whole slew of bad ass bikers are coming into town! They are spreading a message of unity and want to prevent protesters from turning into rioters who assault people. 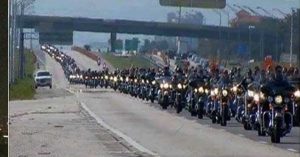 Bikers for Trump roared through the D.C. area Thursday with a message they want to share with America this inauguration weekend.

The bikers gathered in Woodbridge, Virginia, Thursday morning and rolled north on Interstate 95, crossing the Key Bridge into Georgetown on their motorcycles.

They also stopped at Arlington National Cemetery to honor the men and women some of them served with in the military, people who made the ultimate sacrifice in service for their country.

Their message is unity, said John Caycelo of Dumfries, Virginia.

A rider from Brazil who now lives in Arlington and became a U.S. citizen said immigration is the reason she rides for Trump.

“I am an immigrant myself, and for me to get all the papers that I needed to become a citizen was a very hard process,” Leticia Stanley said. “And I did it the right way. And there are a lot of immigrants that do not do that … They come here illegally and I do not agree with that.”

The bikers anticipate they will encounter anti-Trump protests during the inauguration.

Bikers for Trump said protesters expected to demonstrate against the new president have nothing to fear as long as they’re peaceful.