Liberals are not going to like what Tom Brokaw just did to every Democrat in America! Nobody expected something like this to HAPPEN… 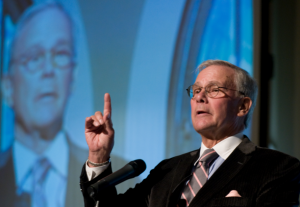 Middle America is still waiting for jobs and all the Democrats seem to care about is the bizarre claim that they will somehow ‘take out Trump.’

“A lot of young people come up to me and say, ‘I’m just outraged by what’s going on. I say, ‘Rage is not a policy.’ That’s my advice to them,” started Brokaw.

“You’ve got to figure out what you want to do. For example, there’s going to be a big push back about Judge Gorsuch from the Democrats. They’re going to make that one of the testing places for them. The fact is, this man has a very distinct background in the judicial world. He has a doctorate from Oxford,” explained Brokaw.

He went on to insult Democrats even more. “Democrats have a lot of reconstruction to do of their own party and that’s what they ought to be thinking about and that’s what they should be getting — they ought to be out in the middle of America saying what do we need to know from you rather than sitting in Washington, reelecting Nancy Pelosi after they lost the House three different times,” said Brokaw.

Check out the video below:

.@tombrokaw: The Democrats have a lot of reconstruction to do of their own party https://t.co/tOfzqyYzds

What do you think about Brokaw’s statement?