Democrat voters are terrified by the coronavirus. Election pundits agree that their fear was reflected in Tuesday night’s voting results. Desperate for a speedy return to the kind of America they had under Barack Obama, Democrats overwhelmingly chose Joe Biden over Bernie Sanders. Socialism is just too revolting in this time of crisis. They want familiarity and comfort, so they’re cuddling up to Biden like a teddy bear.

A quick return to normal

All this talk about the COVID-19 outbreak on CNN has liberals quivering at home, covered head-to-toe in hand sanitizer, and afraid to answer the door. They have a year’s worth of toilet paper too.

Progressives are desperate for a return to the thrilling days of yesteryear when Barack Obama dispensed liberal law and disorder along the border. They know that nowhere in the pages of history will they ever find a greater champion of the LGBQT New World Order than Barry Soetoro. So, they’re ready to settle for his old sidekick.

Biden left Bernie Sanders in a cloud of dust after Tuesday night’s primaries and he’s hoping to show Democrat voters that he’s just the magic silver bullet they’ve been looking for — to bushwhack President Donald Trump with.

Biden wants to be their Anti-Trump

Basking in the glow of his blowout over radical Socialist Bernie Sanders, Biden and his wife Jill took the stage to speak what was on everyone’s mind. “At this moment, when there’s so much fear in the country and so much fear across the world, we need American leadership,” Biden somberly spoke, trying to project a “presidential” tone. “We need presidential leadership that’s honest, trusted, truthful and steady, reassuring leadership.”

Biden finally tapped into the liberal Zeitgeist, with a little help from virus-inspired panic. Sleepy Joe suddenly woke up and realized that with everything turned upside down in the progressive world over the past few years, the last thing they want is radical revolutionary change. They desperately want to return to their comfort zone.

The adults understand that free Socialist stuff comes with a huge price tag. It isn’t worth the cost, when all they really want is for Trump and all his nasty accomplishments to go away. They see Joe Biden as the man to make it happen. They don’t see the big deal about that whole Ukraine shake down thing and who cares if his son Hunter Biden smokes crack? 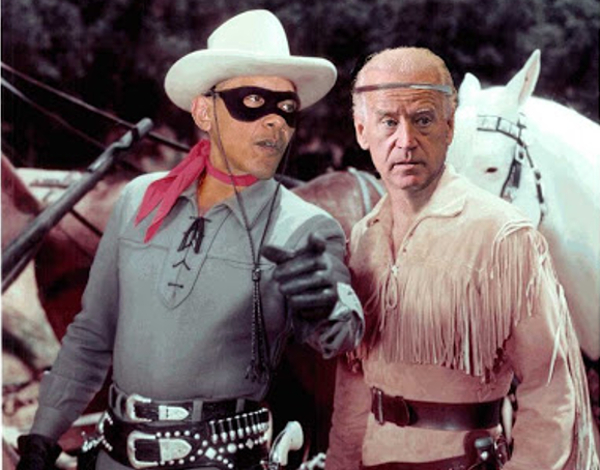 Biden’s new “presidential footing” shows he’s ready to stand his ground to battle the “gravity of the moment.” Bernie’s going to feel that gravity too, as Biden throws him off the cliff.

“I want to thank Bernie Sanders and his supporters for their tireless energy and passion. We share a common goal. Together we’ll defeat Donald Trump. We’ll defeat him together. We’ll bring this nation together.” He’s talking as if Bernie were already gone.

He may be right. Sander’s slunk back home after his miserable defeat Tuesday, without his customary appearance in front of his campaign staff. He needs to think long and hard about what his chances are. If he decides to stay in and fight, he’ll be weakening Biden before his battle with Trump. It’s not an easy decision.

Former opponent Andrew Yang was the first to figure it out. “The math says Joe is our prohibitive nominee. We need to bring the party together,” he told CNN. Alexandria Ocasio-Cortez is upset. “There’s no sugarcoating it, tonight’s a tough night.”

The chairman of Democratic super PAC Priorities USA, Guy Cecil, agrees. “The math is now clear. Joe Biden is going to be the Democratic nominee. He’s going to fork over the cash and promises to “do everything we can to help him defeat Donald Trump.”

The timing couldn’t be any worse for Bernie. He doesn’t want to schedule big rallies, which would help him more than Biden. He may just decide to drop out now and self-quarantine in his beach house with a big bottle of something medicinal and about 80 proof.