The car crash occurred at 1 am on Saturday, the California Highway Patrol reported. And then 37-year-old Michael Tran tried to blame the vehicle itself, claiming “I think I had auto-pilot on.” Instead of taking responsibility for getting behind the wheel of his car while intoxicated, he saw a convenient out to blame the genius behind the car and the features available to consumers these days.

Whether or not autopilot was active when the 37-year-old crashed his car, he was drunk behind the wheel. Police arrested him for driving while intoxicated and it was unreported as to whether he had an attorney or not.

Fortunately, Tran’s reckless, drunk driving did not hurt the two firefighters who were in the truck. But Tran and his 26-year-old female companion were rushed to the San Jose Regional Medical Center where they were treated for injuries, although they were reported to be minor ones.

San Jose fire captain Mitch Matlow admitted that his crewmembers were lucky to be alive. The Tesla driver could easily have killed them if they had been positioned in a different way than they were. Thankfully, the truck served as a barrier and protected the men from certain death. As you recall, the driver was speeding at a 65-mile-per-hour clip when he drunkenly smashed into the firetruck. 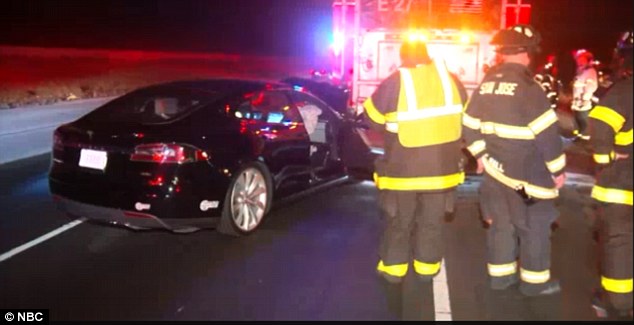 “It was properly positioned, and it saved the firefighter,” he said.

Luckily for Tran, he crashed into the firetruck. That meant life-saving help was already at the scene of his wreck. The firefighters dashed to his damaged car and offered what help they could to Tran and his female companion.

Tesla cars do include a semi-autonomous Autopilot mode. And it has become a thing of controversy in recent months as other drivers try to blame it after they crash their cars.

The carmaker never said the function is able to avoid collisions. It is more of a glorified cruise control function. Drivers must be in control and cannot rely on the autopilot mode completely, Tesla warns. 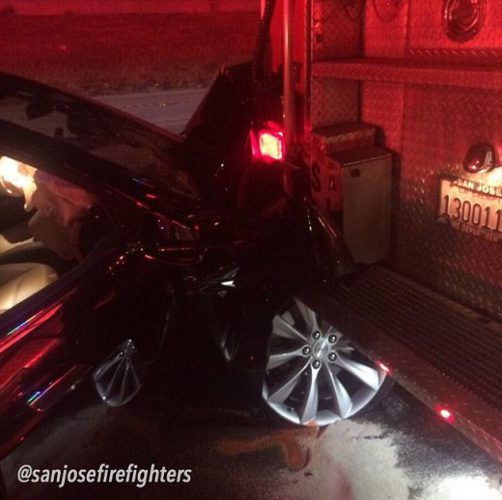 Tesla said that it “has not yet received any data from the car, but we are working to establish the facts of the incident.”

Readers on Daily Mail contributed their thoughts about the car crash and the drunk driver’s “convenient” story to cover his tracks.

“Autopilot? I didn’t know Tesla had airplanes. More like dumb drunk drivers. Seriously how do you crash into a fire engine? It’s BIG and RED.”

“Cannot even imagine how they survived this crash. Crazy stupid people. Thank goodness the fire personnel was not out by the truck. Wow…”