With the stage to himself, billionaire Mike Bloomberg put on his best acting performance so far. The only problem was that he wasn’t acting like a president. The way CNN described his interview made it sound like they were watching a train wreck in progress. “Bloomberg had a good night, and he’s been needing one of those. But even at his best, Bloomberg was just so much worse than the rest,” they write.

If this is Bloomberg’s best, he’s in trouble

Former New York mayor Michael Bloomberg had Wednesday night’s CNN Town Hall stage to himself. There was nobody to interrupt or interrogate him so he had plenty of space to whine about his treatment at the debate. He was a lot more relaxed since nobody was trying to grill him like a steak over his nasty non-disclosure agreements, his connections to Jeffrey Epstein, or his prejudice toward minorities. Nobody even once accused him of trying to buy the election. The time he could have treated as a job interview in front of the American public, CNN notes, was wasted.

The audience seemed friendly when he “repeatedly referenced how often he was cut off and piled on.” The crowd was full of sympathetic nods, “from folks who were apparently also tired of the sniping and jabbing, and just wanted to hear the man talk.” Too bad he didn’t have much to say. “Even at his best,” CNN writes, “Bloomberg is a profoundly lacking candidate.” To start with, Bloomberg simply has no charisma.

The billionaire was happily in his element talking about all the money he throws around. Like the time him and his buddy Jeffrey Epstein went around donating money to the New York schools that Ghislaine Maxwell recruited Epstein’s underage sex slaves from.

The staggering sums of money that Bloomberg casually tosses around here and there on his pet projects “makes him sound out of touch, and like the kind of person who should be taxed much, much more, not in charge of federal tax policy.” He scored the most points with the audience by talking about his big hot-button issue, global warming.

“He had both the broad strokes and the specifics, talking about big-picture policy issues and drilling down on what individuals can do to contribute.” CNN speculates that he used one of his canned speeches because it sounds like what you would hear at a dinner for an environmental philanthropy receiving his support. 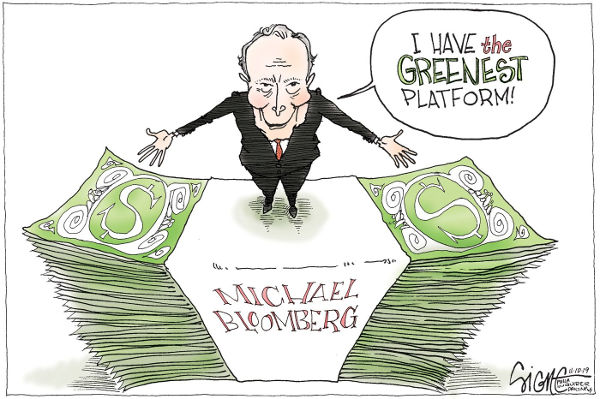 Not right for the job

More importantly, he doesn’t seem to have the skills for the job. According to CNN, “Bloomberg is a businessman, and that’s all fine and good. But if he were interviewing a candidate to be CEO for his company who knew as little as he did about what it takes to be president of the United States, I have to assume he wouldn’t give them the job.”

For instance, when a simple question came up asking if Chinese leader Xi Jinping is a dictator, Bloomberg waffled. He wouldn’t go out on a limb and even say maybe. Recently Jinping stacked the deck so that he’s president for life now. Either Bloomberg is totally in the dark about current world events, or he’s afraid to take a stand. He sidestepped.

China doesn’t have American-style democracy, he noted. “they have a system where a small group of people appoint the leader.” They won’t get that chance again until Jinping is dead. When he can’t give a straight answer to that simple a question, “it should also make voters wonder how he’ll deal with strongmen the world over — and whether he’ll tell the truth.”

He’s also clueless about how military force is actually used. When cornered as to how he feels about keeping combat troops deployed overseas around the globe, he says we need “ground troops for intelligence-gathering.” Sorry Mike, we have spies for that.

The bottom line, at least for the liberals over at CNN, is that “even at his best, Bloomberg was just so much worse than the rest.” Bernie Sanders just hopes all the excitement of running in front won’t give him another heart attack before he reaches the finish line.