If Joe Biden wants to talk about “leadership failure,” then the president reminds Quid-Pro Joe that he has a few of his own, and they’re on the record too. President Donald Trump has always been tough on China. It was a key reason why he won in 2016. His re-election team is using his record to push back on totally false liberal claims that the president was “too trusting” of Xi Jinping in the early weeks of the pandemic outbreak, despite the Chinese lack of transparency.

How does Biden defend his own failure?

The Democrats pulled out all the stops, even going so far as to claim without any basis, that Trump’s policies “led to scores of U.S. deaths.” Campaign spokesman T.J. Ducklo is just begging for a defamation suit when he asks, “how does the Trump campaign defend the worst failure of presidential leadership in modern history that costs thousands of Americans their lives?” They defend it by calling it out for the bovine fertilizer it is.

The Biden campaign went on the offensive with a series of ads targeted at swing state voters. The misleading message is airing in Michigan, Pennsylvania and Wisconsin, along with “a series of local television interviews. The Democrats are trying to hammer home the idea that Trump’s response to China was “weak.” They want the voters to think he “botched” the handling of the pandemic.

Speaking of presidential leadership failure, Barack Obama’s administration provided some examples to match up against Trump’s response to the worst global crisis in history. Biden asserts that Trump’s response was worse than “the terrorist attack in Benghazi, Libya.” Questions are still swirling about how Obama and Biden failed “to recognize the danger and prepare for the 11th anniversary of the 9/11 attacks.”

Then there was the “IRS targeting of political opponents of the Obama administration.” That refers to the Tea Party scandal. Biden may have forgotten about that but the voters haven’t. Then there is all the illegal spying and wiretapping. “Revelations about the collection of domestic communications information by the NSA.” Obama and Biden’s officials “were repeatedly exposed as misleading in all of these scandals, at best.” 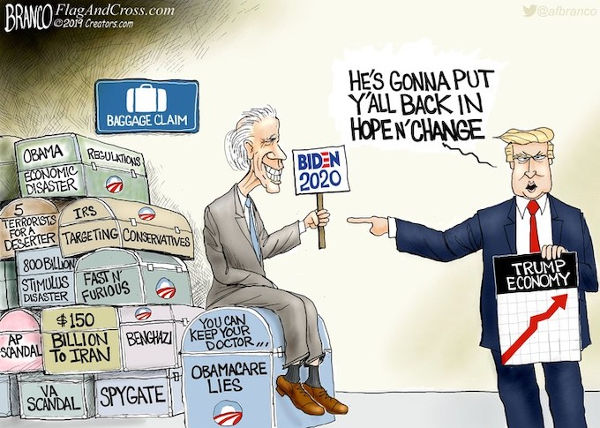 Team Trump is pushing back hard. They invested “five figures” into a two-minute video set to roll Thursday. It points out that Trump decided quickly to “ban most travel from China and Europe.” Joe Biden complains now that Trump waited too long. Back then, he complained that Trump was moving too fast.

Biden slammed Trump’s travel bans as “not effective against the virus,” as well as, “xenophobic” and “fear-mongering.” It’s easy for Biden to second guess Trump’s actions from the comfort of his basement, but nobody knows how Sleepy Joe would have responded if he was in the same spot. He may have been a total failure but the world will never know.

Since Biden wants to compare records, Trump associates are “mining” Biden’s record back to the time he was a senator. They’re looking for evidence of his handling of China issues. It’s expected to look a lot like “appeasement” if not outright “collusion.” For decades, Biden has shown a history of friendliness to the Chinese Communist Party. Then there’s that whole Ukraine thing. Biden wants to play ping-pong, but he’s about to find out that Trump can dominate the table.