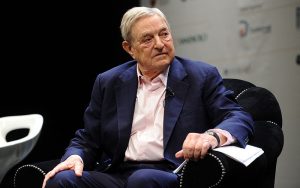 He was reportedly cautious about the market before the election, and then grew increasingly bearish after Trump’s win due to the President-elect’s statements concerning a possible raise in tariffs on Chinese imports, a move many investors saw as potentially upending global trade. From The WSJ:

The stance proved a mistake—the stock market has risen over the past two months on expectations that Mr. Trump’s proposed economic policies will boost corporate earnings and the overall economy.

Soros was born in Hungary but moved to the U.S. at the age of 26 and became a pioneer in the hedge-fund industry. He has been a longtime supporter of progressive causes and gave nearly $20 million to outside pro-Clinton groups over the course of the 2016 election cycle, according to data from the Center for Responsive Politics.

Soros is a currency speculator and because he thought Hillary was going to win he put his money that the markets would drop. Unfortunately the markets rallied because Trump won instead and he LOST ONE BILLION DOLLARS. Alas that is the problem when you buy the media and then believe their fake news.