I guess the saying remains true: “Let the players play, let the haters hate, and let KARMA handle their fate.”

New York Giants player Odell Beckham Jr. sure learned that the hard way in what may be his last game.

Remember, what you do now will come back to you in the future.

And life sure has a funny way of making you deal with what you make others go through. 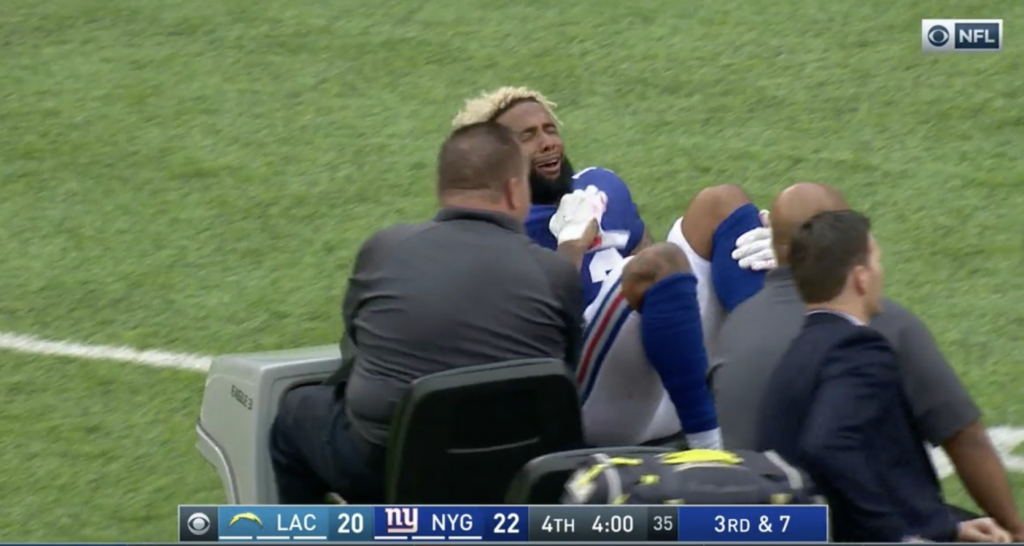 Last week, according to 100percentfedup, after the New York Giants player Odell Beckham Jr., kneeled for our national anthem, he scored a pair of touchdowns in the team’s 27-24 loss to the Eagles and celebrated the scores in very different ways…

After an impressive toe-tap catch in the back of the end zone, Beckham Jr. drew a flag for pretending like he was peeing on the Lincoln Financial Field surface.

Odell Beckham raises his fist after scoring for a second time today pic.twitter.com/dy2G3mgEul

This week, the disrespectful NFL player had a much different experience on the field:

Odell Beckham Jr. was carted off the field in the closing minutes of Sunday’s home loss, 27-22, to the Chargers, the team’s fourth (and best) wide receiver to be hurt on the day.

Beckham went down on a pass that fell incomplete with about 4 minutes left in the game, the Giants up 22-20 at the time, before they promptly blew the game. He rose for the catch then came down awkwardly, his ankle appearing to get caught under cornerback Casey Howard.

He has a broken left ankle. ESPN reported he will seek a second opinion before deciding on the next course of action. –NYP

Life sure is a Boomerang! What these NFL players are giving out is sure coming back around to bite them in the butt.