It’s impossible to tell exactly how devastating an impact the Wuhan coronavirus will have on China’s economy, but everyone knows it’s been virtually destroyed. The question is, who did it? Tracing the trail of breadcrumbs away from the epicenter leads into a deep state rabbit hole that only gets spookier the deeper you dig. Waiting at the end, George Soros is grinning like a Cheshire cat.

China was destroyed, but by who?

There’s absolutely no doubt that 2019-nCoV was carefully designed in a lab, it has scars from spliced genes. The obvious suspect is China. They were seriously caught with their hand in the cookie jar building the bioweapon. They probably didn’t cut their own throat. More likely, they were the victim of sabotage and the virus was leaked intentionally.

The next one in the lineup is President Donald Trump, or at least the Pentagon. America is on the list of suspects because the technology used to create the virus was likely stolen from Harvard University. While U.S. involvement can’t be ruled out, there is another suspect that nobody would think of, yet at the same time, nobody would be surprised either. It makes people wonder how powerful Darth Soros really is.

If China’s economy was the victim of a first degree murder, George Soros had Motive, Means, and Opportunity. There may not be enough evidence to try him in a court of law, and he’s innocent until proven guilty, but his fingerprints are all over the crime. George Soros had insiders at Harvard. Harvard leaked technology to Wuhan. Wuhan leaked the virus. All according to the new world order’s plan.

Soros had the motive, means and opportunity

Billionaire George Soros is fighting for the life of the New World Order. He hates China a lot more than he hates President Trump. While Trump’s nationalism gives him headaches, it’s nothing to the way Xi Jinping infuriates him. On September 9, 2019, Soros wrote an op-ed in the Wall Street Journal saying, his “interest in defeating China ‘goes beyond U.S. national interests.'” To the leader of the New Word Order, China’s self-proclaimed Emperor is the “most dangerous opponent of those who believe in the concept of open society.” Open society means “New World Order.”

A month later, he wrote, “The outlook for open societies is aggravated by the exceptionally rapid development of artificial intelligence.” China has AI monitored cameras everywhere. He called the repressive technology “a  mortal danger for open societies.”

He dropped a hint that he may have taken matters into his own hands. “We live in revolutionary times, when the range of possibilities is much wider than usual and the outcome is even more uncertain than in normal times.” He’s ready to go it alone. “All we can depend on is our convictions. I am committed to the goals pursued by open societies, win or lose.”

The first known Wuhan coronavirus infection was reported December 8, 2019. By the 24th of January the world still didn’t realize the scope of the threat. Soros was in Switzerland, to “warn the world about an unprecedented danger that’s threatening the very survival of open societies,” China. “Tonight I want to call attention to the mortal danger facing open societies from the instruments of control that machine learning and artificial intelligence can put in the hands of repressive regimes. I’ll focus on China, where Xi Jinping wants a one-party state to reign supreme.” 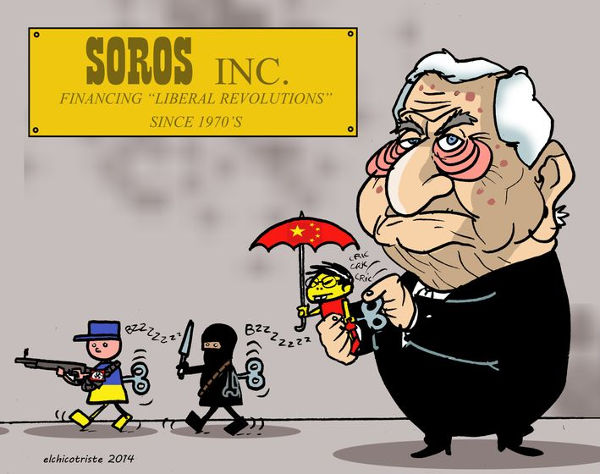 A task that can’t be left to governments

Soros has a plan to protect his precious New World Order. “So Xi remains the supreme leader, possibly for lifetime. The ultimate outcome of the current political infighting remains unresolved. I’ve been concentrating on China.”

Soros has “a task that can’t be left to governments,” He wants to see China’s economy destroyed. “If the decline in the Chinese economy and stock market is severe enough, this social contract may be undermined and even the business community may turn against Xi Jinping. Such a downturn could also sound the death knell of the Belt and Road Initiative, because Xi may run out of resources to continue financing so many lossmaking investments.” Soros got what he wished for.

Down the rabbit hole.

Wuhan, China, is home to the Wuhan Institute of Virology, which Israeli biological warfare expert Dany Shoham calls “the only declared site in China capable of working with deadly viruses.” The Wuhan Institute of Biological Products, a nearby lab, is a “civilian facility but is linked to the Chinese defense establishment.” It’s well known as an arm of the Chinese Bio-weapons program. “The biosafety lab is located about 20 miles from the Hunan Seafood Market,” says Shohan.

Dr. Charles Lieber, the chair of Harvard University’s Chemistry and Chemical Biology Department, was recently arrested for lying “about his affiliation with the Wuhan University of Technology (WUT) in China. He may have helped provide the Chinese with the technology they needed to build the bioweapon. He set up a “secret” research lab while also working for the Department of Defense and National Institutes of Health.

The same day he was arrested, a biomedical student was also detained. Yanqing Ye concealed the fact that she was a lieutenant in the Chinese People’s Liberation Army, “taking orders from PLA superiors while conducting her research.” She was studying at nearby Boston University in their Department of Physics, Chemistry and Biomedical Engineering’s Center for Polymer Studies. She was “assessing U.S. military websites and sending documents and information back to China.”

Some interesting names pop up at Harvard in connection with the matter. Jeffrey Epstein “gave exorbitant amounts of money, at least $9 million (pledged $30 million) to researchers funded by DoD, DARPA, IARPA, and NIH at Harvard University with the expertise and technology to genetically engineer and improve bacteria and viruses.”

Tied to Epstein is Dr. George Church, who used “synthetic biology and genetic engineering to make cells resistant to viruses.” Dr. Martin Nowak, Harvard Professor of Biology and Mathematics and Director of the Program for Evolutionary Dynamics was another of Epstein’s buddies. At the get-togethers with Nowak, Church said, “Epstein seemed interested in the science of life’s origins and mathematically modeling the evolution of viruses.”

Was that interest an excuse to pump the scientists for information while they pumped on his underage sex slaves? Now that would be some valuable blackmail.

George Soros has his own massive links to Harvard. According to media watchdog MRC, “Ivy League schools” like “Harvard, Columbia, and Yale were also well funded through the Soros foundations. A Harvard documentary on the War on Terror received Soros-funds along with various left-wing projects at other universities to include judicial and journalism initiatives. Programs that teach and promote Soros’s ideology are heavily funded across the board.” All that money buys an awful lot of favors.

Send in the moles

It’s not hard to imagine that George Soros had his own network of spies infiltrating all these research labs. He didn’t have to fund or direct the research, just know that it was happening. Epstein’s role in the drama may have been to keep the Harvard scientists happy. If he knew from his moles that the technology was leaking to China, he could have planted a few more agents in Wuhan. All he had to do was wait.

One of the ways the virus may have escaped the lab is after a failed attempt to create a vaccine. There was bound to be more than one opportunity. It’s likely that local residents were infected in clinical trials then released to return home before the incubation period was ended, while some were still contagious. It wouldn’t cost anyone very much to bribe a lab worker to let the class out early.

Though all of this is speculation, where there’s smoke there’s fire. This is all circumstantial evidence for now but if the public keeps asking the pointed questions and demanding answers, the proper officials may eventually get around to investigating to rule out or confirm the allegations.