It’s only Days before the big Iowa Caucus Democrat primary vote, and the anxiously awaited final poll from CNN and the Des Moines Register went into the trash. Because of a technical glitch, they “couldn’t verify that the results were valid” and decided to withhold the “invalid” results rather than mislead the public. Democrats are so upset you would think that the polls were meant to tell the voters how to vote, instead of just sampling how they might vote.

On Saturday night, only hours away from Monday’s voting, a supporter of Pete Buttigieg’s campaign “complained that his name had been omitted by a poll interviewer.” That’s a huge mistake and threw the entire survey into chaos making the results impossible to use.

“Our campaign received a report from a recipient of the Iowa Poll call, raising concerns that not every candidate was named by the interviewer when asked who they support,” explains Buttigieg spokeswoman Lis Smith.

Live operators in a call center were charged with reading the names of candidates off their screen “to determine which candidate a voter planned to support.” An internal investigation revealed “an operator had enlarged the font on their computer screen, cutting off Buttigieg’s name, which had been at the bottom.” The list was generated in random order for each call so it’s not clear if the same thing happened to other candidates. As far as the pollsters are concerned, that doesn’t matter. The decision was made because the same thing could have happened with other candidates.

The Iowa Poll, put out every election by CNN together with the Des Moines Register, is called “one of the most respected political surveys in the nation,” by CNN. Carol Hunter, executive editor of the Register adds, “The Iowa Poll was founded in 1943. It’s built its reputation over many decades for accuracy, and we feel the utmost responsibility to uphold that reputation.”

“This is a high-pressure situation,” notes Ann Selzer. “Things came to light late in the process.” Selzer’s company does the actual sampling and tabulating of the poll. Even though the problem might have been “an isolated incident,” Selzer had an obligation to make a tough call.

“I have two exceptional news partners working on deadline, and there came a time to decide what to do about the poll. Because of the stellar reputation of the poll, and the wish to always be thought of that way, the heart-wrenching decision was made not to release the poll. The decision was made with the highest integrity in mind.”

Candidates are in the dark

Democratic presidential candidates aren’t happy about flying blind into a heated war zone at the polls. Many of them rely on the standings, especially long shot candidates like Buttigieg. Along with his rivals, they’re “crisscrossing the state and were looking to use the survey as a signal to their supporters.”

Bernie Sanders is especially disappointed because he miraculously seems to be in the lead. His Socialist philosophy makes him the favorite of the ultra-far left, which is why he had Alexandria Ocasio-Cortez, Rashida Tlaib, and Ilhan Omar campaigning for him, while he was tied up in jury duty with the Senate kangaroo court. AOC proved once again what an airhead she is, she didn’t mention Bernie’s name a single time in her entire speech. Tlaib was just as much of a distraction, instigating a round of boos aimed at Hillary Clinton. 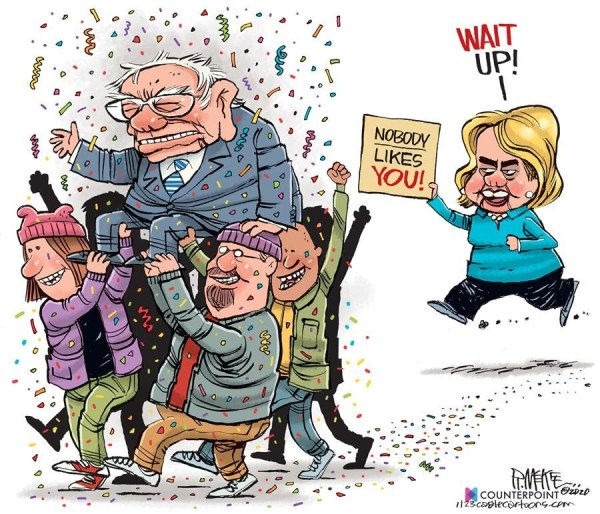 Elizabeth Warren has been holding steady to the second place spot, but with Bernie’s stand-ins botching their assignments and Biden on the skids, she was hoping that voters might have bumped her up to where she might get a whack at Bernie with her tomahawk.

Buttigieg, was also looking forward to numbers showing he had passed Joe Biden in the popularity contest. He’s surprising everyone by giving Pocahontas something to look over her shoulder at. Biden has been plummeting in the numbers like a rock, ever since his son Hunter’s name keeps getting tied to a Ukrainian corruption scandal. It doesn’t help that the White House used it as a huge part of their Defense strategy and it led to President Trump’s acquittal.