Roger Stone will cool his heels in federal prison for three-and-a-third years, after committing the crime of standing up for President Trump. District Judge Amy Berman Jackson hasn’t made any attempt to hide her progressive point of view but she signed off on a compromise solution that works for everyone involved, except Roger Stone. Trying to give him up to nine years hard time, after Andrew McCabe got a get out of jail free card, was a slap in the face.

A cool deal in a hot case

Tempers have been boiling over around the harsh sentencing guidelines recommended in a high profile case. Left-leaning prosecutors wanted to put Roger Stone on ice for at least seven years but they would have been happy to get nine if they could. When President Donald Trump said that’s “not cool,” they tried to extort the Attorney General and it blew up in their faces. All four lawyers stormed off in a snit, one of them quit the Department of Justice. Good riddance.

President Trump acknowledged that the sentence is at least reasonable this time and told reporters he has “no immediate plans” to pardon Stone. He’s content to “let the legal process play out.” He did leave the door open though, adding, “at some point I’m going to make a determination.” It still seems totally unfair to conservative Americans that Stone goes to jail at all when mostly what he did was lie to the Federal Bureau of Instigation. Andrew McCabe did exactly the same thing but he was allowed to skate away like Tanya Harding simply because he worked for the bureau.

If President Trump had his way, every single case that came about from Robert Mueller’s grand inquisition would be thrown out. He’s seriously considering filing a lawsuit over it. 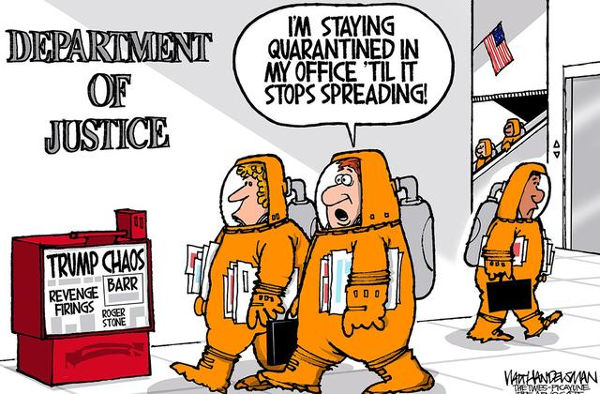 Hot under the collar AG cool too

Attorney General William Barr was actually thinking about quitting over one of President Trump’s tweets. He knew all along it’s nowhere near the level of “interference with Justice Department matters” that liberals think it is but it certainly doesn’t make his high profile job any easier. It didn’t help that after the four Stone prosecutors tried to shake him down, “2,000 former Justice Department officials” signed a petition demanding Barr resign. He new when he signed up for the job that he was going to be controversial. He has a thicker skin than the radical socialists give him credit for, since they have to run for a safe space when they hear the slightest criticism.

President Trump backed down too. Contrary to popular belief, he’s mature enough to acknowledge that he may have crossed a line. “I have total confidence in my attorney general,” he told the press. “I think he’s doing an excellent job. He’s a strong guy.” Trump admitted, “I do make his job harder. “I do agree with that. I think that’s true.” He has no plans to stop doing it either. The two had a phone conference and agreed to disagree.

The general opinion around the Washington water coolers is that the feud is fading. “I think they have calmed down. I think they’re cooling off,” one source leaked. Kerri Kupec an official Justice department spokesperson, posted that Barr “has no plans to resign.” A senior White House aide acknowledged it’s “a serious issue.” Still, “with the strong alignment between the President and the attorney general on so many other issues, the odds are high that they’ll craft a way forward here which best serves the administration.”

Barr has already re-opened the files on “several high-profile cases,” including the one involving Michael Flynn.