Before we get into the wildly popular politician who just made the life changing leap from ‘left to right’, aka from ‘wrong to right’, let’s just recap how we got here …

Never before in my 40 years have I seen the nation as divided as it is today.

Obviously I have some strong biases, but as I try to but them aside as best I can, it appears that the left has gone off the deep end.  Now, our friends on the left would say the same about you and I on the right, however, does the evidence really reflect that?

What about those of us on the right?  Well, we are still pro-life, which the left would call ‘extreme’.  Let’s give them that one, as ‘extremism in the defense of liberty is no vice’ as the late, great Barry Goldwater famously stated.  However, this is nothing new, one of the cornerstones of the GOP has been being pro-life for decades.

Gun rights?  The GOP is now, and has been since Lincoln founded the Republican Party, 100% in favor of defending the right to bear arms.  Nothing new here.

Securing the Southern border?  Not only is this something the Republicans have been talking about for decades, this is something that the left used to agree with us on!

Again, I know I am biased, but holy hell, someone please explain to be how the GOP has gotten ‘more conservative’?

Republicans have a LGBTQ outreach program and openly brag about so called ‘Log Cabin Republicans’. 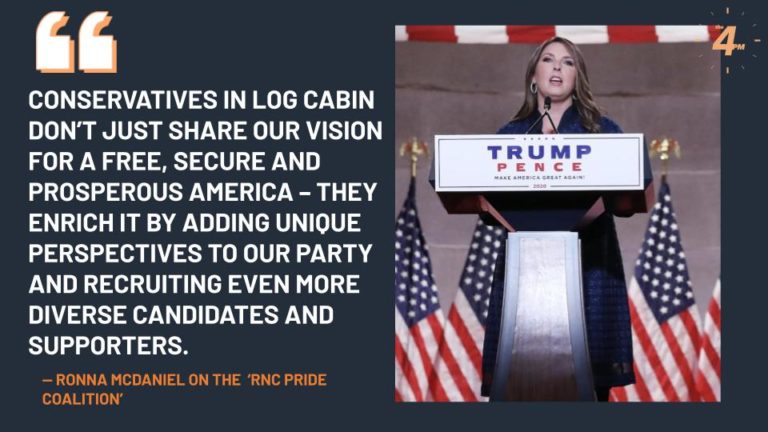 If anything the GOP has moved to the center, and much to the disappointment of its base. Now, while the GOP moves to the center, the left embraces the fringe base and turns in back on the middle … this is why we see so many Dems leaving their party to become Republicans while we rarely ever see Republicans

A Texas Democrat switched his affiliation to the Republican Party over the party’s left-leaning embrace of defunding the police policies and “chaos” on the southern border.

State Rep. Ryan Guillen announced in a Monday press conference that he would seek reelection to his south Texas seat as a Republican, saying the Democratic Party’s far-left values are no longer in line with his own.

Specifically, Guillen cited his now-former party’s backing of defunding the police and the compounding crisis at the southern border under President Biden.

“Friends, something is happening in South Texas, and many of us are waking up to the fact that the values of those in Washington, D.C., are not our values, not the values of most Texans,” Guillen said.

“The ideology of defunding the police, of destroying the oil and gas industry and the chaos at our border is disastrous for those of us who live here in South Texas,” he continued.

The former Democrat had won his seat by nearly 17 points in the 2020 election and has served in the Texas House for almost two decades. Guillen’s switch is a win for Republicans as the party pushes to gain traction along the historically blue border.

“John Lujan’s upset victory earlier this month in a district with a majority Hispanic population already proved that Texans are fed up with the failures of Democratic leadership and Ryan Guillen’s party switch makes that fact all the more clear,” Republican State Leadership Committee (RSLC) president Dee Duncan said in a Monday statement.

“Today’s Democrat leaders are so focused on appeasing their fringe-left base by putting teachers’ unions ahead of parents, pushing socialist tax and spending schemes, and fighting for open border policies, that even elected officials in their own party cannot support their radical agenda anymore,” Duncan continued.

Duncan said the Republicans “welcome” Guillen to the party “with open arms and look forward to working with him” as he works with his new GOP colleagues “to deliver solutions for the people of his district.”

The Texas Democratic Party chairman Gilberto Hinojosa went after Guillen for the switch, attacking the newly minted Republican for “prioritizing holding onto his job rather than standing up for Texans.”

“We’re disappointed to see him selling his soul and selling out South Texans …Don’t let the door hit you on the way out.”

Harris traveled to France last week, where she was panned for putting on a French accent while touring a laboratory in Paris. She had previously traveled to El Paso, Texas — a city along the border but not near the Rio Grande Valley, the epicenter of the crisis — to assess the border situation.

The effects of the border crisis may also boost the already growing Hispanic vote moving toward the Republican Party.’