Arkansas Republican Tom Cotton teamed up with Richard Blumenthal, a Connecticut Democrat, and three other senators to urge our intelligence networks to “take all necessary measures” to protect hospitals from attack by cybercriminals, especially through the coronavirus emergency.

The bipartisan group sent a letter to both the National Security Agency and the Department of Homeland Security on Monday, calling for the agencies to shield health and research organizations from hack attack. DHS is home to the Cybersecurity and Infrastructure Security Agency while NSA’s Cyber Command “spearheads the military’s online operations.”

The group even suggested going on the offensive if necessary, asking the white-hat keyboard wizards to consider ways to “defend forward.” That’s a polite way of saying “hack the enemy.”

There’s a good reason for all the concern. As coronavirus has the whole world turned upside down, “hackers’ success rates are going up.” Cybersecurity experts warn “the economic turmoil and changing patterns of work,” create opportunity.

‘State-backed groups’ behind the intrusions

The World Health Organization was the victim of an electronic attack and it appears that “state-backed groups” were behind it. Last week, the FBI issued a bulletin alerting that “advanced hackers” were also trying hard to infiltrate “U.S. research institutions involved in working on treatments for the disease.” Another “joint advisory” went out from several government agencies about an increase in North Korea’s cyber offensive.

One thing that’s happening now is a huge concern. Hospitals already pushed past their limits from the flood of Covid-19 cases are getting hammered by scams and cyberprobes too. Ransomware infections are still successfully hitting hospitals, shutting them down hard until they cough up the outrageous ransom.

In March, hackers breached computers at the Champaign-Urbana Public Health District hospital in Illinois. For three days, they couldn’t use their computer. They were forced to hand over $300,000 to the criminals, the Pew Charitable Trust reported. 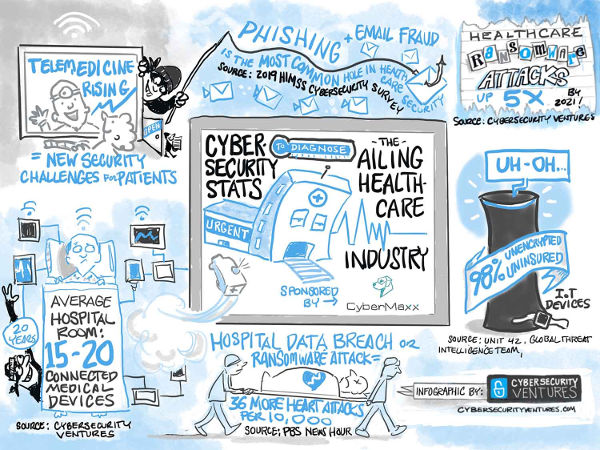 Even before the virus pandemic, hospitals were a juicy target. “Hospitals are not necessarily more susceptible to ransomware attacks. However, an attack can have severely detrimental consequences for them, such as the loss of patient records, and treatment delays or cancellations,” malware analyst Michal Salát asserts. That gives them incentive to simply pay up.

The problem is an international one. In the Czech Republic, a university hospital was also shut down and had to refuse patients. Interpol issued a “purple notice” warning police in 194 separate countries, similar to the one put out by DHS, cautioning about a “significant increase” in attacks directly against hospitals.

One of the ways the hackers operate is by posing as someone from a related organization. Miller-Osborn’s security team caught hackers “posing as officials from the World Health Organization.” They were trying to break into computers at a Canadian government health organization and a medical research institution.

As explained by security analyst Jen Miller-Osborn, the raids are working so well because of “intense pressure created by the pandemic.” The stress makes “workers more likely to slip up and click a link they shouldn’t.” When people are tired or distracted, “it might short-circuit the logic in their brain that says I shouldn’t click that.”

With more and more workers logging in from home, it makes the threat worse. It’s important to patch every laptop and tablet against the expected threats. Unfamiliar networking tools can be a problem too, especially if they aren’t set up properly.