The family of a five-day-old sleeping baby punched in the face by a 64-year-old while out shopping in Tesco with his wife are furious today after he was only fined for the assault.

David Hardy admitted striking Elsie Temple in the supermarket’s biscuit aisle in Baguley, Manchester but then claimed he thought the little girl was a doll.

Company boss Hardy, a father of one, hit Elsie when she was being pushed in a carry cot by her mother Amy Duckers, 27, who had taken her out for the first time since her birth.

The baby immediately cried out in pain – and was left with an injury the size of an egg on her head as her older sister Libby, seven, screamed hysterically to her mother: ‘Is she going to die?’ 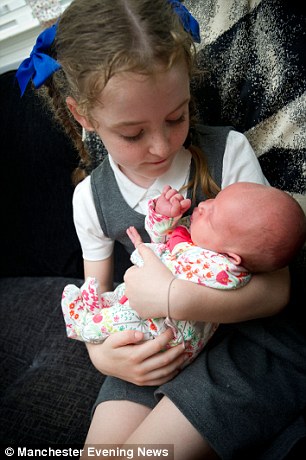 In an extraordinary plea to be cleared of assault Hardy, of Greater Manchester, said today: ‘It looked like a doll to me. I made a dreadful mistake. It is ridiculous but it is what happened’.

But district judge Sam Goozee rejected his defence as ‘implausible’ and fined him £900, ordered him to pay £100 compensation to his victim and £500 costs.

The baby’s family yelled ‘f*****g joke’ as he was sentenced and confronted Hardy outside court yelling: ‘That sentence is disgusting. You punched a baby in the face. How do you sleep at night?’.

She added: ‘Basically, it means you can punch a five-day-old baby and all you will get is a £900 fine. It’s sickening. The judge was satisfied he knew he was hitting a baby but then fines him. I’m literally gobsmacked.

‘Hardy knew full well she was a baby. He admitted he’d come over to see a baby.’

Elsie’s grandfather John Duckers said that a fine instead of a jail term was ‘unbelievable for punching five day old baby’.

He added: ‘He may as well have let him off with nothing. Accident or not that baby has been assaulted. It’s disgusting I can’t believe it. That’s just one month’s pay for him. Should have been a custodial sentence for him’.

The judge who found him guilty admitted his doll defence was ‘implausible’, but rejected the chance to jail him for up to six months.

He said: ‘I find your explanation implausible. It was clear it was a baby and not a doll.

‘It was strange and concerning behaviour and impossible to explain.  Elsie was a vulnerable five day old baby. I accept that this was a exceptional case. I also accept that it was spontaneous, it lacked any pre meditation and I do believe it was completely out of character. The impact it had on Elsie’s mother was clear’.

Hardy had maintained that he though the child was a toy when he struck in Tesco.

The father of one Hardy, was with his wife Elaine who was beckoned over by a friend who said: ‘Come here and look at the beautiful baby’.

Moments later Hardy punched five-day-old baby Elsie, who spent the next seven hours in hospital and suffered a mark on her head the size of an egg, the court heard. 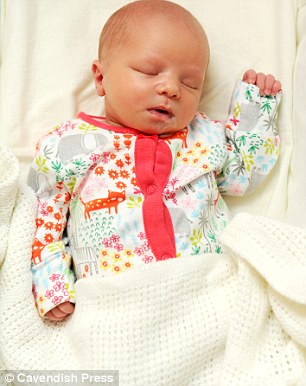 He was arrested after the incident at the Tesco supermarket in Baguley on September 5 at around 6pm.

Elsie’s mother Amy Duckers told magistrates today there was a loud ‘slap’ noise when ‘he came rushing up and punched her in the face’.

She added: ‘I said ‘you have hit my baby’ and he said ‘no I didn’t’.’ before heading off down the biscuit aisle.

District judge Sam Goozee was told that Hardy approached five day old Elsie as she lay in her carry cot inside a shopping trolley then thumped her as the youngster’s mother Amy looked on in horror.

The baby who was left in tears with a red mark to her face, was taken to hospital and was kept in for seven hours before being allowed home.

The incident went viral across social media after Miss Duckers, a 27-year old carer, relayed it on Facebook and branded the perpetrator as ‘sick, twisted and vile.’

The prosecution said: ‘Amy was shopping in Tesco with her family, her partner Lewis Temple, daughter Libby Brown and new baby Elsie Temple.

‘A neighbour of Miss Ducker’s was working at Tesco at the time and this was the first time she had seen baby Elsie and began to make a fuss of her.

‘At that time Elaine Hardy, a co-worker of the neighbour, was walking through the store with her husband David Hardy the defendant.

‘Jane, the neighbor, said ‘come here and look at the beautiful baby’. At that moment David Hardy struck baby Elsie to the face. Amy lifted up Elsie’s hat and saw a red mark the size of an egg.

Mr Hardy apologied and said ‘I’m so sorry I thought it was a doll’.

‘When interviewed Hardy said that he was trying to wind up Libby. He then said that he tapped Elsie on the head. He was devastated when he realised it was a baby and apologised.’ 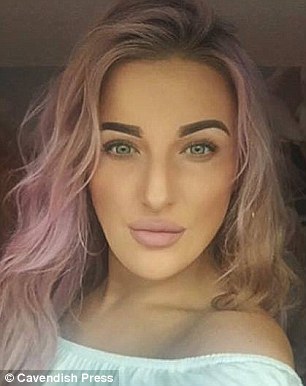 She told magistrates: ‘Julie (her neighbour) said come and have a look at this beautiful baby. Then he came rushing up and as I looked over my shoulder he punched her in the face.

‘It did connect yes I saw and heard it. I heard the slap of the punch as well. My (older) daughter was hysterical. She was screaming is she going to die.

‘I said ‘you have hit my baby’ and he said ‘no I didn’t’. It was only after he had seen that he marked her he admitted that he did and then he said I thought she was a doll.

‘Obviously I was in shock and Julie just looked at me and said ‘did that actually just happen’.

‘She had a fist mark across her forehead in the shape of an egg. I was absolutely distraught. It was the fact my other daughter had to see it that made it ten times worse.

Elsie was rushed to Wythenshawe Hospital, arriving at around 9pm, and was kept in until 4am the next day.

Witness Julie Wasilewski said: ‘I was excited about the baby. I said to Elaine come and have a look at this beautiful baby.

‘He came over and he reached over and just hit the baby on the forehead. She just woke up and cried. As that happened he was stunned.

‘She was very upset. She said to him ‘you just hit my baby’, and he said ‘I thought it was a doll’. He walked past us. He walked behind me further up the aisle.

‘There was a mark in her forehead like an egg shape’. 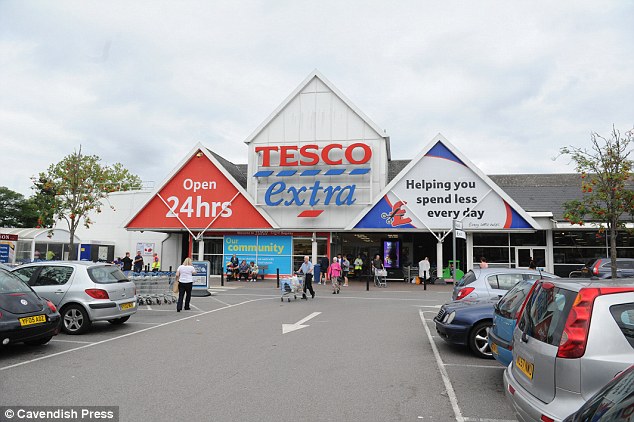 Crime scene: The incident happened in the biscuit aisle Tesco in Baguley, Manchester on September 5 this year

In police interview Hardy said: ‘Julie said in a childlike voice oh come and look at this baby. I saw a young girl hanging over the shopping trolley. I honestly thought it was her dolly. I said I’m going to wake your baby up. It looked like a doll to me. It wasn’t moving. I didn’t punch it I just tapped it in its face.’

Hardy told the hearing he curled in his fingers and ‘flicked’ at what he thought was a doll. He added: ‘I thought I was just going to make the girl laugh. I don’t know why I thought that. I thought it was a little girl’s dolly. I realise now it wasn’t but at the time.

‘Julie said ‘I can’t believe you did that’ and with her saying that it all fell into place what I had done. I immediately realised. I stood back and thought ‘oh god, it’s a baby’. I honestly thought it was a doll.’

‘I can remember the mother crying and quite rightly so. I would be devastated myself. It was like a state of disbelief. Her husband came and I said ‘I’m really sorry pal’.’