A Texas woman driving her pickup truck with an anti-Trump message to the President and his supporters was recently arrested.

The officer charged her with an outstanding warrant and then fastened on the hand-cuffs. The District Attorney and many others feel that the warrant will not stand because she is protected by the First Amendment. Even the woman felt she wasn’t doing anything wrong and just practicing her “Freedom of Speech.”

Honestly, all she is showing to the children of America is that ‘it is okay to spread hate towards our President and get away with it.’

This woman is doing nothing more than making the left look like deceitful, evil hypocrites. 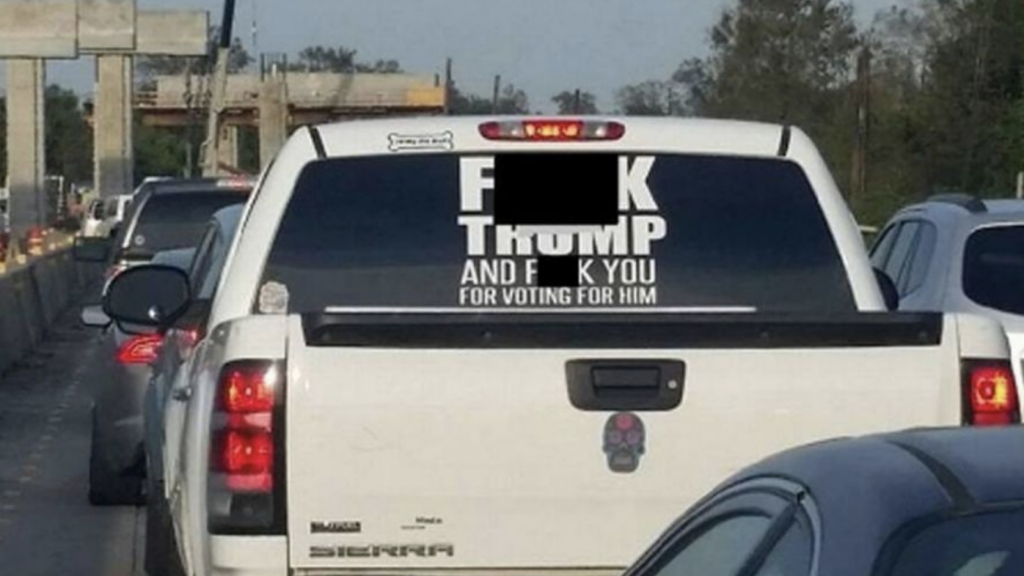 The more hate these unhinged liberals spew, the more Independent voters will be inspired to go to the polls and vote for Trump in 2020.

The owner of a pickup truck that drew attention this week because of a profane anti-Trump sticker was arrested in Houston on Thursday on an outstanding warrant.

Mike Fonseca, her husband, posted her $1,500 bond Thursday night and she was released an hour later, Houston’s KHOU-TV reported.

A sheriff’s spokesman didn’t respond to a message seeking details about the warrant.

Previously, Fort Bend County Sheriff Troy Nehls threatened Fonseca with a disorderly conduct charge over the decal. However, District Attorney John Healey said he didn’t think the case would have stood up in court because of First Amendment protections on free speech.

Fonseca defended her right to keep the sticker on the vehicle.

“It’s not to cause hate or animosity,” Fonseca, 46, told the Houston Chronicle. “It’s just our freedom of speech and we’re exercising it.”

Fonseca said the message has been on the rear window of the pickup for nearly a year and it’ll stay there for the time being.

“There’s no law against freedom of speech, nothing in the law book here in Texas,” she told KHOU-TV. “I’ve been stopped numerous times, but they can’t write me a ticket.”

Nehls on Wednesday posted a photo of the profane sticker on his Facebook page, threatening the then-unidentified Fonseca with a misdemeanor charge of disorderly conduct.

A spokeswoman for the sheriff’s office said Thursday that Nehls removed the post after Fonseca was identified.

“Due to the hate messages he has been receiving toward his wife and children, the sheriff will not be commenting on the matter further,” the spokeswoman said in an email. –Fox News