She was just walking her dog at the park when this heartbreaking and tragic crime happened. She was stabbed but not just once. The killer even carved a hateful word on her chest.

Clark utilized a cellphone tracking app to find Janness, according to what her father, Terrell Clark, told The Atlanta Journal-Constitution. Janness frequently took their dog, Bowie, a 3-year-old pit bull, to the nearby Piedmont Park, which features a dog park.

It was clear that both Janness and Bowie had been ruthlessly murdered when Clark tracked her at the park on July 28. The woman and her dog were found about 100 feet distant; her partner having been stabbed many times.

According to a GoFundMe, Clark said that the incident was so tragic and that her partner was the most intelligent person.

Clark said, “It was tragic. She was the most intelligent, kind, humble, and beautiful person I have ever known.”

Clark said of Bowie, “He was the sweetest most loyal companion. My heart is so very broken, my world will never be the same. Thank you to everyone who has reached out. It is truly appreciated.”

Clark imagines that Bowie likely died trying to save her partner as Bowie was a very loyal companion and had a deep bond with Janness.

This horrendous event trembled locals and loved ones alike, and although the Atlanta Police and the FBI have been investigating the incident, they have not yet identified the suspects.

The mayor of Atlanta, Keisha Lance Bottoms, stated that this incident didn’t seem to have been executed as a hate crime or part of a serial killing spree — this was completely different. 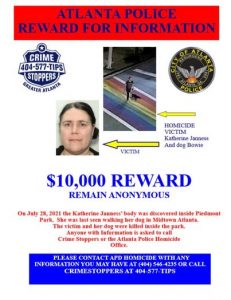 Bottoms said, “This does not fit the description of anything that we’ve seen.”

On July 30, an autopsy was performed and the results were publicly released on Friday, pointing out new, horrific details about the case.

According to the report from the Fulton County Medical Examiner, Janness had been stabbed over 50 times, with at least 15 cuts to the head. Additionally, the word “FAT” had also been carved across the skin on her chest.

“It is my opinion that Katherine Janness died due to sharp force injuries of her face, neck, and torso that caused injuries of major blood vessels and internal organs. The manner of Ms. Janness’ death is classified as a homicide.”

The word carved into the victim’s chest is indeed disturbing. What is more confusing is that she was described as being 5-foot, 5-inches, and 155 pounds, putting her at a normal body weight range.

Terrell Clark wrote in a statement, according to the New York Post:

“The report is extremely heartbreaking to read and know the exact nature of what Katie endured in her final moments on this Earth. Whoever is responsible is very disturbed and remains a danger to everyone’s safety. Please be vigilant and aware of your surroundings for we would hate for any family to be put through this nightmare.”

To commemorate Janness and Bowie, the GoFundMe was used to raise funds to put two benches and a tree in Piedmont Park, near the dog park.