Construction workers at Emerson High School in Oklahoma City found what soon to be an archaeological site as they continue to renovate the school.

A construction crew at the Oklahoma City school made a startling discovery earlier this month. They found old chalkboards with class lessons that were written almost a century ago, and chalk drawings still in remarkably good condition.

The school was built in 1895, and the preserved slate blackboards were covered with new chalkboards in late 1917, which we know thanks to the company that installed them and left behind a chalk-written note (see below). Nearly a century later, workers discovered the lessons while installing new whiteboards and smartboards. 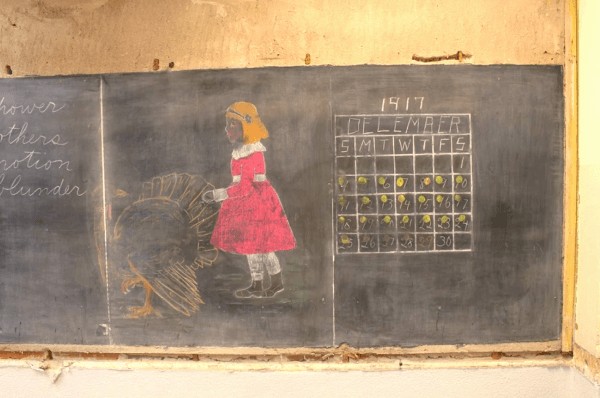 Once uncovered, the chalkboards revealed a rare and stunning time capsule containing lessons about math, reading, music, handwriting, personal hygiene, pilgrims, and God. Old-timey names such as Agnes, Gladys, Homer, and Mabel were written next to a subtraction problem.

As schools make way for more modern whiteboards, chalkboards are quickly becoming a thing of the past, and Emerson High School in Oklahoma City is no different. However, no one imagined what they’d find when they pulled back the walls lined with the old chalkboards. Underneath, another set of slate boards was hiding — perfectly preserved and untouched since 1917.

Although it’s hard for many of us to imagine what school was like a century ago, the boards provided unique insight. Scribblings and doodles from both teachers and students, long since forgotten, were found, as well as lessons on a variety of things from the Pilgrims to how to keep clean.

Excerpt from The Oklahoman reports:

Other depictions on the boards showed the progress school curriculums have made. Far different from the way math is taught today, a wheel used to teach multiplication appears on one board. “I have never seen that technique in my life,” Emerson High School Principal Sherry Kishore told The Oklahoman.

Like opening a fascinating time capsule, everything was there from math and reading to music and writing. Many viewers were most impressed by the lost art of cursive handwriting, including the principal. “The penmanship blows me away because you don’t see a lot of that anymore,” Principal Kishore told the Oklahoman. “Some of the handwriting in some of these rooms is beautiful.” The words are beautiful, indeed. However, the photos of the century-old discovery aren’t just mesmerizing to look at, some speak volumes about the changes we’ve seen as a nation. “I give my head, my heart, and my life to my God…,” one of the historic chalkboards reads, reminding us of a much different time in our country. “Their names are here; I don’t know whether they were students in charge that day that got to do the special chores if they were the ones that had a little extra to do because they were acting up,” Principal Kishore said. “But it’s all kinds of different feelings when you look at this.”

While it might seem strange to younger people, for the older generation, it was a journey back to their youth. “It’s like you’re walking into a time capsule that’s been preserved. The chalk is so bright and clear that it could have been done yesterday,” Principal Kishore explained.

Principal Sherry Kishore decided to show the discovery to her 85-year-old mother, and she will never forget her reaction. “She just stood there and cried. She said it was exactly like her classroom was when she was going to school,” she recalled.

Although the school has undergone several renovations since it was built in 1895, none have resulted in a historical discovery like this. The images do inspire all kinds of different feelings when you see them, so it comes as no surprise that the district decided to work with the city to preserve the chalk drawings. It’s nice to see something that evokes such nostalgia as it gives us a rare glimpse into the past. It’s not often we get to see history in such an up-close and personal way.