The Santa Monica Fire department had to pry a young man out of a crumpled jeep crashed into the side of a McDonald’s restaurant early Sunday morning. He apparently decided to take an express shortcut from the parking garage next door. Right off the roof of the six story building. He’s been seriously injured but doctors believe he will survive.

The express route to McDonald’s

“While injured,” police say, the driver “was conscious, suffering and speaking with officers when they arrived.” The identity of the “sky-driver” from Twentynine Palms, California, has not yet been identified. “As a part this ongoing investigation, the Santa Monica Police Department learned that the driver experienced non-visible health issues.”

Two of his buddies managed to jump clear of the moving jeep just before it launched into space, sixty feet above the ground. It took the express route straight to McDonald’s, landing right beside the building, all the way on the other side of a four lane road. As related by the press release, “both the top of the parking garage and the McDonald’s, located on a four-lane street across from the garage, were significantly damaged.” First responders “extricated him from the badly damaged Jeep. “The SMFD transported the driver to the UCLA Westwood hospital in critical condition. The driver is recovering in stable condition at the hospital.” 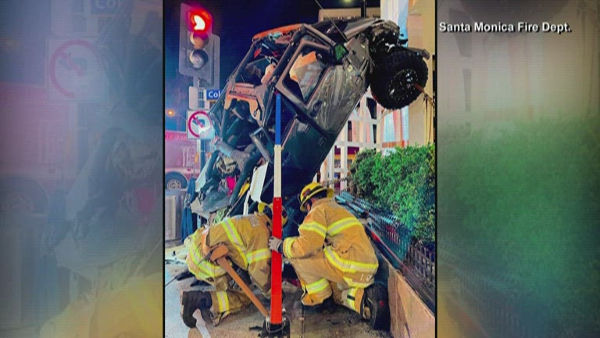 The police can’t say if the 20-year-old driver was intoxicated, but they have a warrant out for his blood as soon as they can get it. “Because the driver was receiving medical treatment, officers were unable to determine if drugs or alcohol played a role in the accident.” His friends either aren’t talking, or else they just aren’t talking to reporters. Still, it’s a pretty good bet that the young man was intoxicated on something. Especially considering they were on the way home from a Saturday night in the Santa Monica Pier area.