Number of documents related to Matt DePerno’s work in Michigan revealed last night. He addresses in his documentation the fact that the Michigan Secretary of State is attempting to run out the clock on discovery.

Deperno discusses in one document (Collective Response To Motions for Protective Order 040921) the actions of Michigan’s Secretary of State, Jocelyn Benson. It has been recently reported on George Soros backed Benson’s decision not to speak in front of Michigan’s Senate about the election:

Deperno notes the following about Benson in his report on page five: 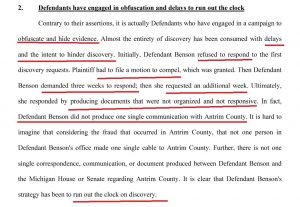 The largest states in the Union is trying to obfuscate and delay the work of good people who want to get to the truth behind the 2020 election in her state. The Secretary of State must be hiding something.