After knowing what her child’s homework was all about, Tara Cali of Bakersfield hurriedly stopped her son from doing it and went into social media to express her dismay to the school that made her son answer such thing that she thinks ridiculous.

Cali’s son brought home assignments that required seventh graders to list the five pillars of Islam, which include charitable giving, prayer, fasting, faith, and holy pilgrimage. The homework also includes a bar code that allowed students to listen to a YouTube video of the call to prayer at the Blue Mosque in Istanbul, Turkey.

After knowing this Cali wrote a note on the paper and posted it on a Facebook page:

“My son will not be a part of this in any sort of way. This is bad teaching material. He will not partake. If you have a problem with it, call our lawyer,” she wrote. She went on to cite Bible verses and wrote, “How about Christian practices? That sheet has never come home, this year or last!” 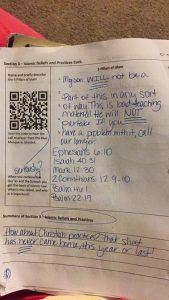 Some of the comments she received disagree with her stance but she then further explained that she took issue with Qur’an scripture that is included in the textbook and homework.

“It isn’t the assignment itself, it is the context of the school book that upsets me,” she says. “There are two pages of straight Qur’an scripture and then the various worksheets have scripture at the top. If a Mormon child, Christian child, or Buddhist child brought their book of faith to school, the uproar would have been insane.”

According to the Southeastern Area & National Religious Freedom Counsel for the Anti-Defamation League, David Barkley:

“Schools can teach about religion, but they can’t indoctrinate religion, to teach about Islam, you have to teach about what Muslim people believe and what the faith teaches. As long as you are not saying, ‘this is a valid religious belief’ or ‘this is the truth,’ then it is constitutionally permissible.”

Some parents may take issue with any religious teaching, but Barkley says that schools have every right to teach students about religion. “If your class is World History, Islam is a part of that, just like Christianity is and Judaism is and Hinduism is,” Barkley said. “How can you teach that history without saying that this is the belief system?”

The American Civil Liberties Union also said that “while it is constitutional for public schools to teach their students about religion, it is not constitutional for them to “advance particular religious beliefs.” The ACLU stated the guidelines for teaching religion in schools.