Billionaire Michael Bloomberg appeared to do a complete flip over one of the hottest accusations against him. His new position on the sexism allegations is a total “waffle” from what he said on the debate stage. It’s still not good enough for Pocahontas. The billionaire has been holding women in bondage, tied up with non-disclosure agreements, like the ones his buddy Jeffrey Epstein used to keep all his accomplices out of jail.

Former New York City Mayor Mike Bloomberg got grilled like a steak at the Las Vegas debate. Every candidate on the stage, but especially Elizabeth Warren, attacked his history of treating women like pieces of meat. Despite the juicy nature of the accusations, like telling female employees to “line up” and give one of his associates a “blow job” because he was getting married, he told his accusers tough luck. They agreed to sign non-disclosure agreements and that’s that. Besides, it’s nothing serious. “None of them accuse me of doing anything other than maybe they didn’t like a joke I told.”

Now, it seems Bloomberg went for the gourmet style waffle. “I’ve done a lot of reflecting on this issue over the past few days,” he assures voters. Probably as he was looking at the result numbers of his dismal performance rating. “I’ve decided that for as long as I’m running the company, we won’t offer confidentiality agreements to resolve claims of sexual harassment or misconduct going forward.” As for those three women who have already accused him of naughty things, “the women should contact his company for a release.”

Pocahontas grabbed her battle club. That’s “not good enough,” she shrieked. She went as far as drafting up a “release and covenant” that she wanted him to use. Warren insists that those three are only the tip of the iceberg. “Michael Bloomberg needs to do a blanket release so that all women who have been muzzled by non-disclosure agreements can step up and tell their side of the story in terms of what Michael Bloomberg has done.” 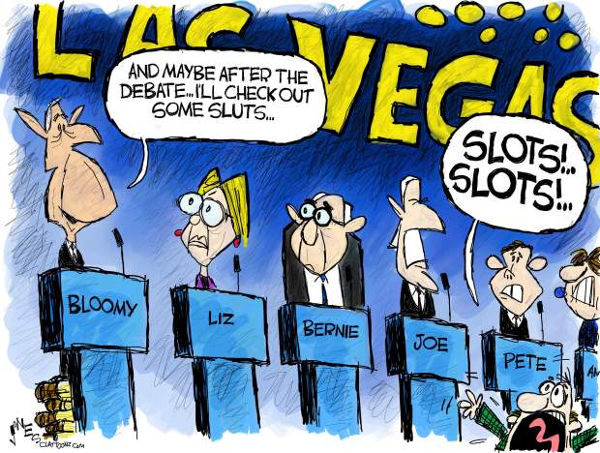 Bloomberg put on his best sociopathic look of contrition before tapping out a tweet. The agreements, the billionaire concedes “promote a culture of silence in the workplace and contribute to a culture of women not feeling safe or supported.” According to his social media post, “Bloomberg LP has identified 3 NDAs signed over the past 30+ years with women to address complaints about comments they said I had made.” While he admits to the three that he hasn’t been able to discredit, he ignores what could turn out to be potentially hundreds more accusers.

A spokesperson for the Biden campaign released a statement in reply to Bloomberg calling his promise meaningless. It “essentially tells the public nothing.” According to Kate Bedingfield, “horror stories abound in the public record about the culture at Bloomberg LP under Mayor Bloomberg’s leadership. We don’t know how many women signed these NDAs, what percentage of NDAs this represents, or what categories of signed NDAs exist that are excluded.”

One of Bloomberg’s high-level fixers told the press, “there are certainly other lawsuits about gender discrimination or sexual harassment at the company, but again, only three have been identified as accusing Bloomberg for saying inappropriate things.” Things like, “look at that nice piece of ass,” as female colleagues walked by.

Bloomberg tries to convince the voters, especially women, that just because he hung around with Jeffrey Epstein and Ghislaine Maxwell, there’s no reason not to trust him in the White House. After all, another regular at Epstein’s poker parties, Bill Clinton, didn’t make all that much of a mess, other than what splashed on a certain dress. “I will be a leader whom women can trust,” Bloomberg insists.