A group of bicycle enthusiasts in Dallas, Texas is begging police to catch whoever is stringing trip-wires across the Ridgewood and SoPac bike trails. If it’s prank, they scold, it isn’t funny.

Wrecking a bike is dangerous. They’re made up of “many hard and sharp components which, in collision, can do grave damage to people.” P.J. O’Rourke insists. “Crashing isn’t fun,” agrees Ginny King of the King Racing Group. “To think that you’re crashing because somebody else wants you to, doesn’t seem right.”

Just because bicyclists “look like organic-gardening zealots who advocate federal regulation of bedtime and want American foreign policy to be dictated by UNICEF,” is no reason to ambush them.

The rope or twine rigged across the trails was chosen to blend in with the scenery and obviously didn’t hang itself from pole to pole, King points out. “It was tied by a human.” These booby-traps could easily injure or kill someone. Imagine riding along, pumping your legs, gritting your teeth to the lung searing pain, like you “were being chased across the Pleistocene savanna by saber-toothed tigers,” then suddenly hitting a chest high cable.

Tensioned cords have been tied in several locations around the Lakewood and Lake Highlands areas. One strung chest high to an adult might be throat high to a child.

Because their vehicles are so “quiet and slight,” Cyclists have enough problems to start with. “Frustrated truck drivers and irate cabbies make a point of running bicycles off the road.” Because they’re so hard to see and hear, “people pull out in front of bicycles and open car doors in their path.”

The cycling group thinks local juvenile delinquents are behind it. The trail is located near Emmett J. Conrad High School. 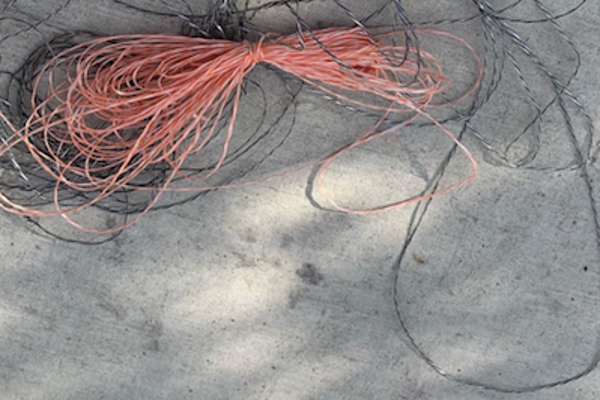 “We see kids out here all day long during school hours, and that’s what’s concerning to me,” King complains. These kids should be in school but aren’t . “They’ve got too much time on their hands and they’re just causing trouble.”

There has already been one victim. King relates that her friend’s father, a 69-year-old cyclist, crashed last week. “He nearly crashed really bad. He didn’t see it until the last minute and I think he laid the bike over,” she said. You can’t see it until you’re about right here, and sometimes it’s too late.”

Martha Parks wants some help from law enforcement. “I wish that the Dallas police would amp up the bike patrols in this area because there’s absolutely no supervision. We’re not getting as much patrol at White Rock Lake or on these trails, which I think is much needed.”

Dallas Police assure parks she will get some help. They told the local CBS station, “we are aware of these incidents occurring at the SoPac location and our bike officers will be monitoring the area very closely, particularly during school hours. In addition, we will direct any necessary resources in that area as needed. We want anyone occupying those trails to remain vigilant and report any suspicious activity.”

Hitting a wire at just 15-20 mph could cause serious injury. Last year, one Colorado man “suffered a broken right clavicle, three broken ribs, a concussion and road rash after hitting a similar trap.”