In the early hours of Wednesday morning, Republican Senators voted to squash Democrat time wasting by a 53-47 margin, cleanly split along party lines. There isn’t any sense, they decided, to drag out a parade of witnesses and start digging through boxes of documents, until Democrats can say which actual “crimes” were allegedly committed.

It’s well accepted that in order to be a “crime” it must be “declared as such by the relevant and applicable law. Democrats are only insisting on witnesses and exhibits because they can’t name a single clear violation of an “applicable law.” All they do is sidestep the issue with hearsay and speculation.

Connecticut Senator Chris Murphy told reporters, “This may be our only chance, tonight, to make this a fair trial.” To Democrats, a “fair” trial means one like they had in the House. A kangaroo court where the outcome was a foregone conclusion.

Lead Defense lawyer Pat Cipollone shredded the Democrats over that issue in the first round of proceedings. He came out strong, attacking “the foundation of the charges,” and spelling out exactly why they didn’t meet the constitutional standard. “The only conclusion will be that the president has done absolutely nothing wrong. There is absolutely no case.”

Cipollone didn’t pull any punches, calling the whole Ukraine investigation “an illegal attempt” to overthrow the duly-elected President. Not only that, they’re trying to throw a monkey wrench into this year’s contest. “They’re not here to steal one election, they’re here to steal two elections,” he declared. 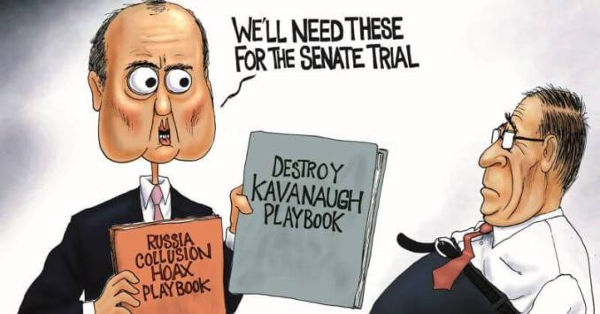 Jerry Nadler got so upset that he forgot which chamber he was in. He threw a temper tantrum over the issue of whether John Bolton should testify. When he started throwing his weight around, like he’s used to doing in the house, it earned him a stern reprimand from Chief Justice John Roberts. “Those addressing the Senate should remember where they are.” Nadler accused Republican senators of “voting for a coverup.”

White House counsel Pat Cipollone got a slap on the wrist too, for his choice of language in response. “The only one who should be embarrassed, Mr. Nadler, is you. For the way you addressed this body. This is the United States Senate. You’re not in charge here.”

Roberts told them both to calm down. “I think it is appropriate for me to admonish both the House managers and the President’s counsel in equal terms to remember that they are addressing the world’s greatest deliberative body,” Roberts reminded.

He didn’t think he was being overly restrictive. As Roberts explained, “In the 1905 Swain trial, a senator objected when one of the managers used the word ‘pettifogging’ and the presiding officer said the word ought not to have been used. I don’t think we need to aspire to that high of a standard, but I do think those addressing the Senate should remember where they are.”

Senator Mitch McConnell agreed to ease up on the schedule a little so now there will be 48 hours of opening arguments, 24 hours each side, spread out over 6 days. Trial is expected to resume at 1:00 p.m. Eastern time.