A 65-year-old man who slapped a waitress’ butt after his wife had gone to the bathroom could face a year in jail, it’s emerged.

Clarence H. Locke Jr. and his wife arrived at Denny’s in Rome around noon and sat at one of Jayme Adair’s tables before ordering drinks.

“The customer and his wife came in together. I didn’t recognize him by his face, but when he walked in he said, ‘Hello Jayme.’”

Locke’s wife soon left the table and went to the restroom, and that’s when the incident unfolded. 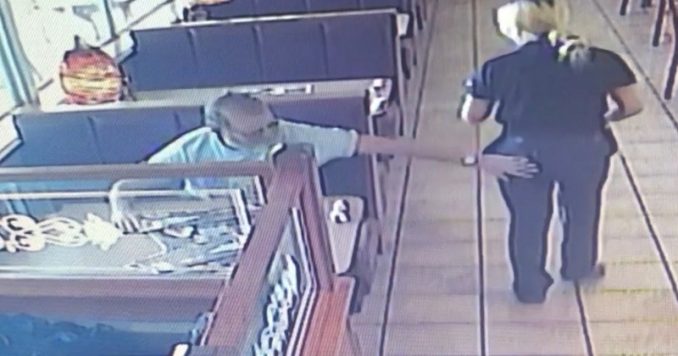 Shocking CCTV footage shows the moment Clarence H. Locke Jr.r slapped Jayme Adair on the butt as she walked away from the table. (Photo Credit: Screen Capture via SWNS)

Adair said that she immediately informed her manager and told the man to leave the restaurant, WKTV reported:

“I get their drink order, I turn to walk away and he reaches out of the booth, almost falls out of the booth and tries, and hits my butt. And I was just in shock. I never had something like that happen to me.”

The waitress added, who has worked at the restaurant for five years:

Fox News has more details of the story:

The alleged assault was caught on CCTV, and authorities were able to identify Locke shortly afterwards. He was arrested later that day around 1:30 p.m., Syracuse.com reports.

“So many women go through this and it is not fair. I did nothing wrong and I did not deserve that,” Adair said.

Locke was charged with forcible touching, a Class A misdemeanor punishable with up to a year in jail or three years’ probation. Upon conviction, the violation does not require a person to register as a sex offender, unless the victim is younger than 18 or it is not the attacker’s first sex-related conviction, WKTV reports.

Locke was later released on an appearance ticket for City Court.

“Working women are sick and tired of being subjected to this kind of abuse,” Oneida County District Attorney Scott McNamara told the outlet. “Why someone would think that they could touch these people like that defies logic.”