There is nothing on this earth that is worth going to jail over, despite what some of the phony tough might tell you. If you attack someone, they will eventually recover and you’ll be in prison.

Think about it for a minute, as much as you might want to smack someone for being stupid, the greater punishment is that they have to go through life being stupid.

A Clearwater woman allegedly flew into a rage when she saw a Trump flag on the back of a car Thursday as political tensions boiled over the nation following Wednesday’s violence in Washington. Ashley Limbert, 44, is facing multiple charges stemming from an alleged road rage incident Thursday, including simple battery and throwing a deadly missile into an occupied vehicle. 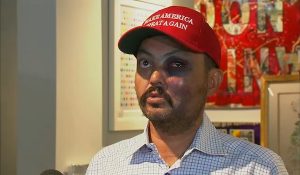 According to an affidavit, Limbert was angered by a car that was waving a Trump flag in the area of State Road 580 and U.S. Highway 19. Deputies said she threw a paper cup at the car, then got out of her vehicle and chucked a can of dog food at the other car, hitting a window.

Deputies said Limbert walked toward the car’s passenger, the driver’s father, and was behaving aggressively. The report did not mention when or why the man got out of the car, but he ended up pushing her out of the way, and when her aggression continued, he pinned her to the ground, authorities said.

Deputies said Limbert began biting and scratching the man’s leg. Then she picked up the can of dog food and threw it at his head, hitting him.

At some point during the incident, she ripped up the flag and bent the flagpole, deputies said. The damage was about $50.
Limbert was arrested Thursday for criminal mischief, simple battery and throwing a deadly missile into an occuppied vehicle. This incident was just one of many hate crimes committed against Conservatives recently. The Left has become completely unhinged.

Two women have been indicted on hate crimes after they stole a seven-year-old boy’s Make America Great Again hat outside the Democratic National Convention (DNC) in Delaware.