President Donald Trump’s new task force is already taking aggressive action. Their mission is to stalk down and eliminate criminal profiteers who take advantage of the crisis by hoarding and price gouging. “We must do the best we can to protect Americans’ rights and safety in this novel and troubling time,” Attorney General William Barr declared.

The U.S. task force on hoarding and price gouging, led by federal attorney Craig Carpenito, is hunting for people with a garage full of toilet paper and hand sanitizer. Anyone “whose purchases exceed reasonable limits” will be prosecuted like the criminals they are.

Their online enablers were put on notice too. Amazon, Walmart, Facebook, and eBay were all warned to seriously step up prevention efforts by officials in 32 states. “Even new protections by your company including heightened monitoring, bans on certain advertisements, and bans on selling certain items, have failed to remove unconscionably priced critical supplies.”

Attorney General Barr is already investigating “the hoarding and price gouging of critical medical supplies.” He’s digging into fraud too. On Sunday, the Department of Justice announced they “closed down a website selling non-existent vaccines.” His deputy, Jeffrey Rosen, notes, “You should be on the lookout for these sorts of schemes.” 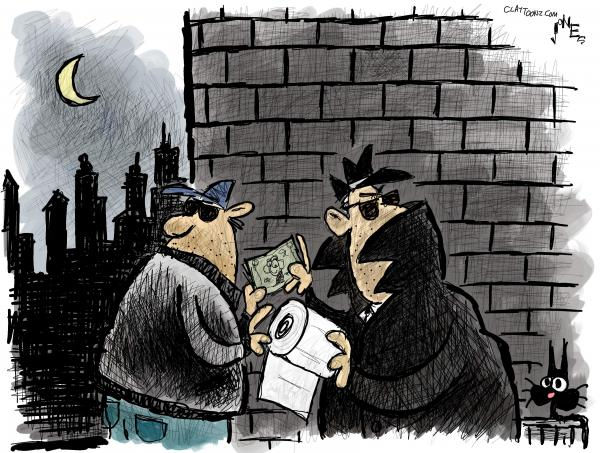 From the top down

Earlier this month, the Attorney General ordered all federal prosecutors to make outbreak related crimes their top priority. Each U.S. Attorney’s office is required to dedicate a prosecutor to work on nothing but coronavirus fraud cases.

That prompted a task force order to state AG’s across the country to be on the alert. Not only are they to throw the book at hoarders and price gougers, they need to watch sharply for scams targeting “federally-insured Medicare patients with fake tests or unnecessary antiretroviral prescriptions.” There have even been “threats of violence to local mayors and robberies of patients and doctors leaving hospitals.” Any crime related to the crisis gets special penalties.

The state AG’s got together in a group led by Pennsylvania’s Josh Shapiro, with help from the AG’s in Connecticut, Vermont and New Mexico. Their bipartisan coalition wrote to the big retailers, including Amazon, Walmart, Facebook, and eBay. They aren’t doing enough to stop the price gouging. The group listed specific remedies that the retailers must put into effect at once.

Retailers must think ahead

A state’s declaration of emergency should automatically trigger “price-gouging protections.” Retailers should be aware of what constitutes “fair pricing” and at least display a page where consumers can report complaints. “They should use their data and analytics tools to stop price spikes, not play whack-a-mole when they find something on their platform,” the group writes.

The Public Interest Research Group issued a recent report noting, “nearly 1 in 6 of the products sold directly by Amazon had prices spike 50% higher than the 90-day average.” Amazon has since pruned “3,900 seller accounts involved in this activity.” They are “working with state attorneys general to identify and prosecute third-party sellers.”

Group spokesman Shapiro told reporters, “we are seeing them handle this on a case-by-case basis, which is really not practical.” His office alone has taken in around 2,900 reports of price gouging. Physical stores are just as guilty of profiteering as online retailers. So far, he’s ordered 90 sellers to knock it off now with “cease-and-desist orders.” If they continue selling high priced commodities, “his office can fine them up to $10,000 per violation.”