A server’s display of her low paychecks has split opinions online and caused debate over the usefulness of tipping culture after going viral.

The woman, identified only as Liny, of Nashville, Tennessee, raised eyebrows after she shared a video of herself on TikTok displaying the paychecks she received from her job and said she earned one cent in total over the last couple of months.

The 25-Year-Old showed three different paychecks in front of the camera. One of them issued on August 30th had zero dollars, another for September 13th also had zero dollars, while a check received on September 27th showed $0.01. “The f*** lma do with one penny Steven!” Liny captioned the now-viral clip. 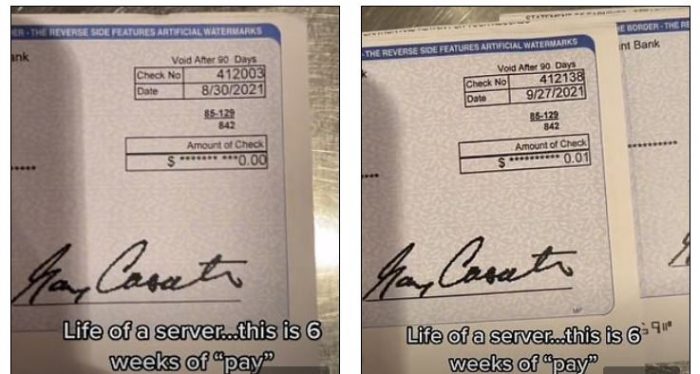 She added: “Life of a server. This is six weeks of “pay.” Tip your servers.” The federal minimum wage for tipped employees in the United States is $2.13 per hour, but for every paycheck, 1.45% is removed for medicare taxes while 6.2% is removed for social security. Paid employees must pay income taxes, and the government will determine how much they owe based on the amount received from earned income.

Viewers have since been left shocked, with some insisting that servers deserve a tip for their service.

Viewers debate whether or not consumers ought to tip their waiters. Some claimed servers deserved a tip as they barely made anything from their basic salary. Meanwhile, others contended it should be the restaurant’s decision and that they should pay their employees more.

In Liny’s case, she paid everything she earned toward taxes, including her income tax. After the government took their money from her paycheck, she was left with nothing – because the restaurant does not pay her a livable wage. The video has sparked a massive debate among people online. Some people feel that restaurants need to start paying workers for their labor, while others say that they’re not able to pay a server’s salary and therefore cannot tip well.

One person wrote in the comments, “It’s not my job to pay your bills. I got my own to pay.”

Another person wrote, “I always tip, But restaurants need to pay you guys.”

“Can you show us how much in tips you claimed for that pay period? I’ll be you made more than a 40-hour week minimum wage.”

Another person accused Liny of deception, writing: “She made 0 because she made more money in tips than what they pay her. That’s how it goes. So her showing her checks saying to tip is misleading.” 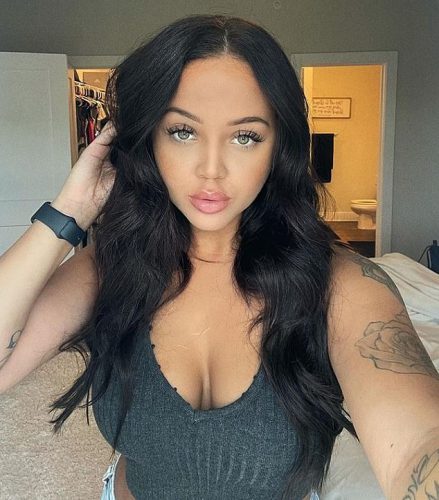 “Don’t let her fool you, why want you tell us how much you made from tips during this six-week period. And why are you getting a check six weeks later?” Another person added.

What do you think about the practice of tipping servers? Should restaurants pay higher wages?