A man who was naked and trapped within a wall in a US theatre for two days has been freed by firefighters.

Emergency service staff in Syracuse, which is a city in the state of New York, received a usual call for assistance on Friday (local time) after banging was heard coming from inside a wall in the theatre’s bathroom. 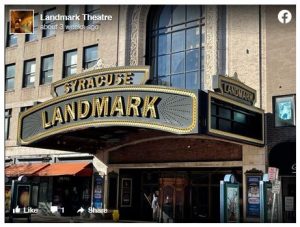 Authorities said, the unidentified 39-year-old man got into the building Tuesday and managed to get into a crawl space.

The man stayed there for two days before he fell into a space in the wall of the men’s bathroom and became trapped, according to Syracuse Fire Deputy Chief John Kane

Firefighters on Friday drilled a hole in the wall and used a fiber-optic camera to find his location. They cut through several layers of drywall and structural clay tile to free the man.

The man was taken to a hospital for evaluation, but he had no visible injuries but was probably suffering from dehydration.

A message was sent to Syracuse police Saturday seeking an update on his condition.

The Syracuse Fire Department posted about the unusual rescue on Facebook.

“Upon arrival, members of Rescue Company 1 drilled a hole in the wall and utilized a fiber-optic camera to determine his exact location and how to best extricate him.”

“Firefighters were then able to free the individual after carefully cutting through several layers of drywall and structural clay tile. He was treated and transported to Upstate University Hospital by AMR. His condition is not currently known.”

The executive director of the theater, Mike Intaglietta, told Syracuse.com, “I don’t know if he was entering to keep warm or to use the bathroom, I don’t know.” 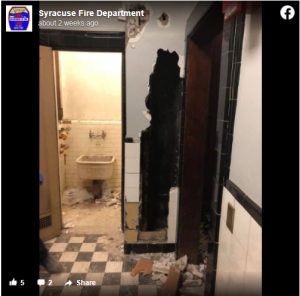 No criminal charges have been filed, and locals commenting on the fire department’s post provided more details. Shanika Knighton said her dad works at the theater and the man found in the wall is a well-known homeless man who frequents the area.

“[S]ad but true and he was drinking his own urine, My dad works there,” she commented.

The theater is considered by many to be haunted, so some people wondered if the man was a ghost hunter who took a wrong turn, but the clotheslessness complicate that theory.

Whatever his story, hopefully, the man will get help and avoid such dangerous decisions in the future. It’s a mercy someone heard him and notified authorities; otherwise, this situation could have had a much darker ending.