Toby Keith isn’t about to be bullied and threatened for performing at Trumps inauguration and he isn’t sorry either! Toby Keith is an all-American country star and while libs are targeting Trump, Keith is there for America! That’s what this is all about, making America great again. Keep scrolling to see what he had to say to the haters… 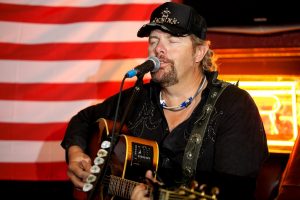 Amidst the seemingly overwhelming list of “no, thank you”s, one big name in country music isn’t about to let politics get in the way of a performance. Toby Keith, a self-proclaimed “independent” is set to perform at the Lincoln Memorial on January 19th.

The proud American singer has an extensive list of musical accolades and has repeatedly shown his support for the United States military.

3 Doors Down and Toby Keith are performing at the Trump Inauguration. Don't buy any more of their albums. #GrabYourWallet

Its called Freedom of Choice just as I have the choice not to listen to his hideous music.

Despite the criticism, you won’t find him saying “sorry” anytime soon.

In a statement to Entertainment Weekly, the country star said:

“I don’t apologize for performing for our country or military.”

His music transcends the political aisle, and his statement highlighted other important performances he has done:

“I performed at events for previous presidents [George W.] Bush and [Barack] Obama and over 200 shows in Iraq and Afghanistan for the USO.”

With songs titled “American Soldier,” “Courtesy of The Red, White, and Blue,” and “Made in America” the singer seems like the perfect entertainer to perform at one of America’s most important events.

That’s what I like to see! A celebrity who won’t allow liberals to bully them. It’s called freedom! Hypocritical Democrats…