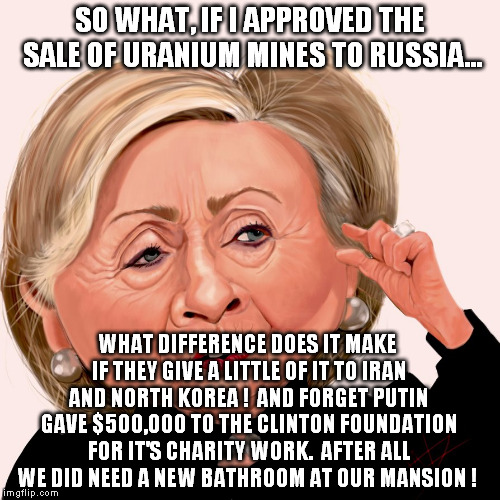 When liberals decided to pursue accusations against Donald Trump with claims of Russian collusion being the cause of his 2016 presidential win, mainstream media outlets spent weeks covering every conceivable angle despite the complete lack of evidence. Now, in contrast, as similar accusations are brought against the Obama administration regarding bribery during the sale of uranium to a ‘private’ Russian company that resulted in a 100 million dollar ‘donation’ to the Clinton foundation to which actual evidence exists, the media networks are completely silent? And there really needs to be defense that these outlets follow on obvious left leaning narrative? Really?

While sitting next to Puerto Rico Gov. Ricardo Roselló at the White House, Trump lit into reporters in a rant that they will not cover.

“That’s your story. That’s your real Russia story. The real story is uranium,” Trump told reporters. “Not a story where they talk about collusion and there was none. It was a hoax. Your real Russia story is uranium and how they got all of that uranium — the vast percentage of what we have. That, to me, is one of the big stories of the decade. Not just now. The decade.”

“The problem is mainstream media does not want to cover that story because that affects people they protect,” Trump claimed. “So they don’t like covering that story. But the big story is uranium and how Russia got 20 percent of our uranium and, frankly, it’s a disgrace and it’s a disgrace that the fake news won’t cover. It’s so sad.”

Real reporting is seriously lacking in the American airwaves thanks to liberals controlling the media and putting whatever twist they please on the facts in order to support their agenda rather than the TRUTH.