A British mom has been left baffled after her son’s school sent back a lunch box packed full of fruit and vegetables.

Laura Lee said she had sent her 2-year-old son to nursery with a packed lunch consisting of sandwiches, crackers, cheese, and chopped fruit and veg and had also added the small extra treat of mini cookies.

Packing fruit and veg into her son’s lunch box, Lee thought she’d given him a nutritious meal. That was until his school deemed it ‘unhealthy’ and wouldn’t let him eat part of it.

Laura Lee shared a photo of her son’s lunchbox on Facebook in response to a Plymouth Live story in which teachers shared stories of the worst packed lunches they had seen. 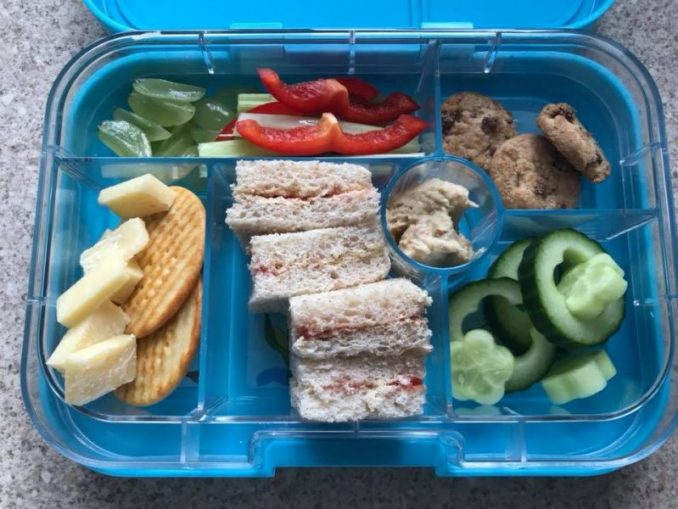 One woman said that her own son went to school with a perfectly reasonable lunch, only for teachers to call her over his “fizzy” drink. It was actually carbonated water and not lemonade like teachers thought.

The post also inspired others to talk about the free school meals available to kids in the UK, which often include a dessert such as syrup sponge and custard, or other high-sugar items.

Just seeing the picture of the lunch box, it was pretty obvious the mother put a lot of effort into packing for her son since the meal included cucumber slices with the middles cut out into cute little flower shapes. To most, the lunch would seem pretty healthy with two compartments full of fresh vegetables. So, the question becomes, if the toddler eats some of the rest of the lunch, are three mini cookies really a big deal?

Others pointed out that the lunches served by the schools are often much less healthy than the ones seen in Laura Lee’s photo.

Replying to Laura, Stephanie Hughes wrote on Facebook: “Amazing, when a child’s free school lunch can have syrup sponge and custard for a pudding.” 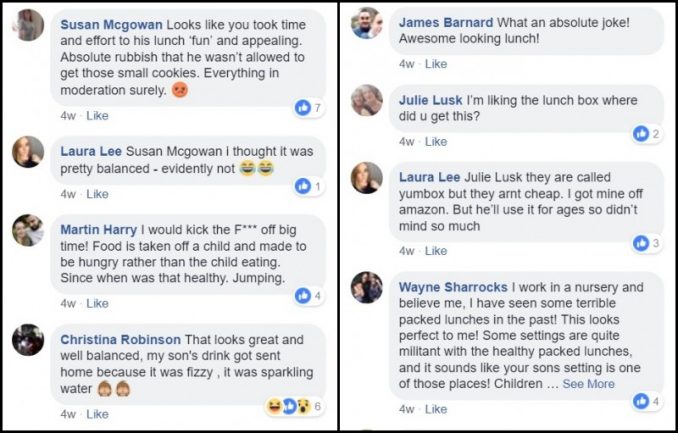 Well, Lee wasn’t alone, other parents were also shocked by what their child’s school returned after deeming it “unhealthy” either.
After saying the meal “looks great and well balanced,” Christina Robinson admitted, “My son’s drink got sent home because it was fizzy, it was sparkling water.”
Wayne Sharrocks also wrote: “I work in a nursery and believe me, I have seen some terrible packed lunches in the past! This looks perfect to me!”

Taphaps concluded in their report, it’s commendable to want children to be healthy, of course, but does it have to be all or nothing? Isn’t moderation the key? It seems a blanketed ban does leave the very little grey area and is the course of action some have chosen to take in order to make enforcement easier.