It claims to be the world’s largest private residence, and one of the most expensive too, and for the first time ever, it’s for sale: “The One,” located in the tony Los Angeles neighborhood of Bel Air, is a 105,0000-square-foot estate that’s set to be listed in an auction on January 7 for a staggering $295 million.

If it sells at that amount, the hillside property will be the priciest home ever sold in the U.S. “The One” boasts 21 bedrooms, 42 full bathrooms, multiple pools, a nightclub complete with a VIP area, a bowling alley, a 40-seat movie theater, a full-service hair salon, and a 30-plus car garage, among a sprawling list of amenities.

The One was built by developer Nile Niami of Crestlloyd LLC over the last 10 years, according to Kirman, and only recently completed; it has never been lived in and was placed into Chapter 11 bankruptcy protection in October.

The home was once estimated at $500 million, making the current asking price seem like a bargain in comparison. 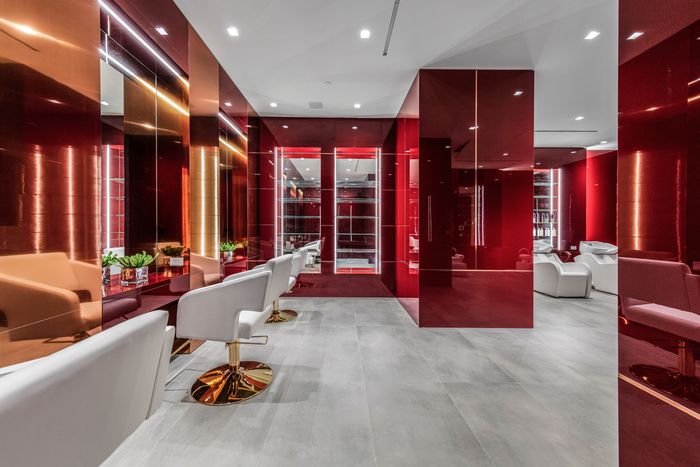 The megamansion has a dizzying array of amenities, including a fully functional salon. Courtesy Unlimited Style Real Estate Photography

According to Marc Angeles:

“It’s a modern masterpiece,” said Branden Williams, of The Beverly Hills Estates, which is representing the property along with Aaron Kirman of Aaron Kirman Group at Compass. “It’s four acres at the top of a mountain in Bel Air, and it can never be built again.”

Along with a record-setting price, “The One” also comes with a history of drama, lawsuits and debt. It was built by Nile Niami, a Hollywood-producer-turned-developer, who promoted it as the “biggest and most expensive modern home in America,” with an eventual asking price of $500 million.

As costs soared, Niami’s debt on the house grew to more than $180 million. The megamansion was placed into receivership last year. As part of a bankruptcy agreement struck last month, it was scheduled to be sold at an auction, beginning Feb. 7.

“The One” is situated on 3.8 acres with much of the residence surrounded by a moat-like water feature.

People involved in the court process said “The One” would have to sell for around $200 million just to pay back the debt, including the auction fees and other costs. If it sells for less, the lenders may have to take a loss, or the property could wind up in further foreclosure litigation.

Marc Andreesen just set a record in California after he paid $177 million for a compound in Malibu, while Coinbase CEO Brian Armstrong paid $133 million for a modern mansion, located near “The One” in Bel Air.

Brokers say interest in “The One” has already been strong. Williams said he has two offers on the table — one from a Saudi royal and one from a wealthy Chinese buyer. He said more offers are expected soon from crypto buyers who are “looking at this house as their own space station.”

The megamansion is sometimes referred to as “the space station” because of its massive size and unusual shape.

The lenders also continue to battle each other in bankruptcy court over procedures and priority. Niami weighed in with his own last-ditch effort last month, releasing a video saying he hoped to turn the home into a crypto investment, selling a new token to investors called “The One Coin” that would be backed by the property.

The four-lane bowling alley on the home’s subterranean level.