It’s possible that the US Postal Service is spying on you.

Yahoo News reported Wednesday that it had obtained a “Situational Awareness Bulletin” from the US Postal Inspection Service — the mail agency’s law enforcement arm — describing its involvement in a secret surveillance program called the Internet Covert Operations Program whose aim is to track and collect information about Americans.

According to the bulletin, the covert program enlists researchers to scour social media sites for “inflammatory” posts ahead of expected demonstrations, specifically “right-wing leaning Parler and Telegram accounts.”

“Inflammatory posts,” according to the two-page paper, are those that “say [that] future violence can occur,” despite the fact that “no intelligence is available to suggest the validity of these threats.”

These letters are then sent to various government departments by the Postal Service.

The bulletin received by Yahoo was about protests scheduled for a March 20 “World Wide Rally for Freedom and Democracy,” at which demonstrators will demonstrate against a number of issues, including the introduction of 5G technology and COVID-related lockdowns. 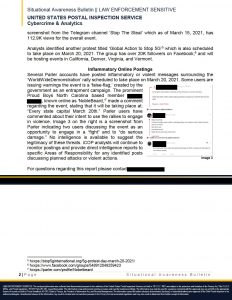 The demonstration was organized by politically conservative groups and was billed as a “MAGA” and “anti-tyranny” gathering. According to the USPIS bulletin.

The memo referred to a screenshot from Parler in which two users addressed the possibility of doing “significant harm” and engaging in a “battle” with BLM agitators who could turn up at the protest under the heading “Inflammatory Online Postings.”

However, in the same section, the bulletin mentions that NobleBeard, a “prominent Proud Boys North Carolina based participant,” had posted that the World Wide Rally for Freedom and Democracy will be held on March 20 in “every state capital.”

NobleBeard’s letter, on the other hand, was neither intimidating nor inflammatory. It appears to have been classified as a, “inflammatory online posting” simply because the author’s Parler profile describes him as a “4th degree PROUD Kid.”

Even if NobleBeard is a member of the Proud Boys — and it’s unclear if he is because his Parler profile says “this profile is satire” — government monitoring centered on First Amendment-protected actions like non-threatening expression or participation in an association is clearly illegal.

The real question is why the government will use the Postal Service to scour social media for security threats that have nothing to do with the distribution of mail, rather than the FBI or the Department of Homeland Security.

Given the Postal Service’s financial insolvency, it seems illogical for the government to put even more pressure on the cash-strapped agency’s finances by tasked it with online monitoring of activities that fall outside of its purview.

The Postal Inspection Service acknowledged the existence of the secretive program, according to the Yahoo article. But deflected when pressed for the reason for its authority to track social media activity unrelated to mail system use.

Its mission, in answer to that query, is to “protect the United States Postal Service and its staff, equipment, and customers; enforce the laws that protect the nation’s mail system from unauthorized or unsafe use; and maintain public trust in the mail.”

Such a clichéd response is unsatisfactory since none of these missions can be construed to include monitoring Americans’ social media behavior.

“The enclosed information was collected and disseminated pursuant to… 18 U.S.C. 3061,” according to the memo. However, the act only allows the Postal Service to protect property that it owns or occupies, as well as to enforce laws relating to “the use of the mails, and other postal offenses.” Domestic espionage is definitely not protected.

So, why are they doing it in the first place? Political retaliation is most likely the solution.

Remember when President Barack Obama used the Internal Revenue Service (IRS) to go after conservative groups? Biden seems to have taken a page from the playbook, although on a more personal level.

President Donald Trump named Postmaster General Louis DeJoy, who was slowing deliveries just as the pandemic swelled the number of mail-in ballots for the 2020 election. It’s unclear why the post office is now involved in social media monitoring, which seems to have little to do with mail deliveries.

Left-wing critics accused DeJoy of enacting these measures to keep tens of thousands of lawfully cast absentee ballots from arriving at elections offices on time — a claim that, if valid, would have boosted Trump’s electoral prospects and hurt Biden’s.

Is it too far-fetched to imagine that now that Biden is in the White House, the administration has directed the Postal Service to track conservative groups and individuals as a form of retaliation?

Furthermore, using the Postal Service prevents further tarnishing the FBI and NSA’s reputations, which have already been tarnished by revelations of their FISA violations and other unlawful surveillance activities.

DeJoy is still the postmaster general, but once Biden’s three nominations to the Board of Governors of the United States Postal Service are approved, the balance of power will tip in favor of the Democrats, something DeJoy must be acutely aware of because the board has the power to oust him.

Doing the administration’s bidding may be a form of penance for DeJoy, as well as a form of self-preservation.

There’s still a lot to learn about this secret surveillance scheme, including if it’s legal.

One thing we know,  vengeance is best served cold — and, obviously, by mail as well.