Only a single week before the Iowa caucuses launch the 2020 election race into high gear, card carrying Socialist Bernie Sanders has managed to snatch the pole position. It even forced Hillary Clinton to grudgingly acknowledge she may actually have to break down and back him, if she has to. She’s was almost torn to vote for Trump, for about a tenth of a second.

“Moderate” Democrats are going extinct as Alexandria Ocasio-Cortez and her crowd continue to prod the party to the left. No old white men for them, they swear. Well, except Bernie, he’s different. He’s cool and wants to give them a lot of free stuff. One Democrat In Name Only decided he’s had enough and crossed sides. Many of his heard are wandering the same direction like there was an undefended border. 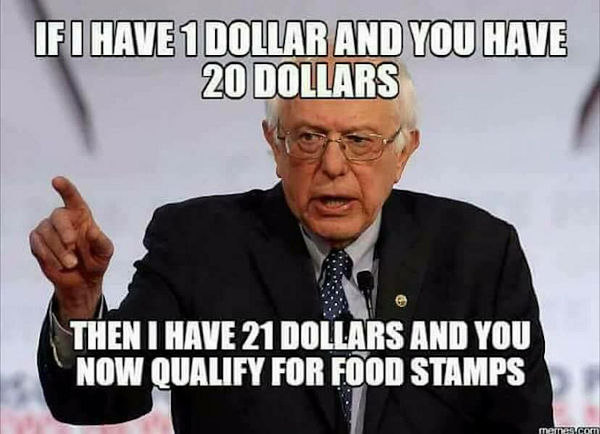 Colorfully Queer Pete Buttigieg is cuddling with Joe Biden in matching poll numbers. Joe’s son Hunter Biden is dragging the former frontrunner down like an anchor. His name keeps coming up over and over again in the impeachment circus. Even liberal Democrats are starting to think Trump had something to investigate after all.

They want to know why they don’t get appointed to cushy jobs on foreign boards of directors. Just like Hunter Biden, many have more than their fair share of “crack and vodka binges.” If that qualifies him then why not them?

Pocahontas, who is the only other “moderate” with any chance at all, even it is only 1:1024, watched her numbers plunge. That’s not surprising after Bernie sent his minions to  scalp Elizabeth Warren along the campaign trail a couple of weeks ago.

Bernie sent his fanatical supporters across Iowa with a script saying the moderate couldn’t beat Trump with a tomahawk. Only elite, “highly-educated, more affluent people,” would vote for her, not people like you find in Iowa, his young, energetic, character assassins told voters, door-to-door.

Between the circus in Iowa and the Democrats’ other circus in Washington, One moderate lawmaker got so disgusted, he quit. Jeff Van Drew, a freshman congressman from New Jersey, “was one of only two Democrats to break ranks and vote against both articles of impeachment.” Since then, he went all the way and officially registered as a Republican.

President Trump can’t wait for all the television coverage in the “voter-rich Philadelphia suburbs.” It could hand Pennsylvania to the incumbent because “Trump will be able to tout Van Drew as an example of how impeachment is driving some conservatives into the GOP tent.”