Startling footage of a man abusing his child was captured by one of the popular new doorbell video cameras. When police tried to arrest him, a two-hour standoff ensued. While this particular incident led to a happy ending, it highlights the double-edge sword that the dangerous new technology swings around casually.

On January 27, police in Phoenix, Arizona, were invited to a woman’s home to watch a video clip captured by her digital doorbell video camera. What it shows is a man later identified as Matthew Flores, “kicking his 10-year-old son in the stomach, knocking him to the ground.” That’s not all. “Flores then allegedly kicks him in the lower back and the arm as the boy is trying to get up.”

When they showed up at the home of the 35-year-old monster, he wasn’t man enough to even talk to them. “Instead, he refused and locked the door.” The swat team was soon on the scene and they surrounded the place for two hours until his attorney could talk him into surrendering on the phone. According to court records, this isn’t the first time that Flores was in trouble for “violence against the children.”

Big Brother isn’t as sinister as he used to be, but that doesn’t make widespread government intrusion any less dangerous. After a progressive public relations makeover, Big Brother got a sex change operation and became our little sister. Now, she uses cute nicknames like “Alexa” and “Siri.” 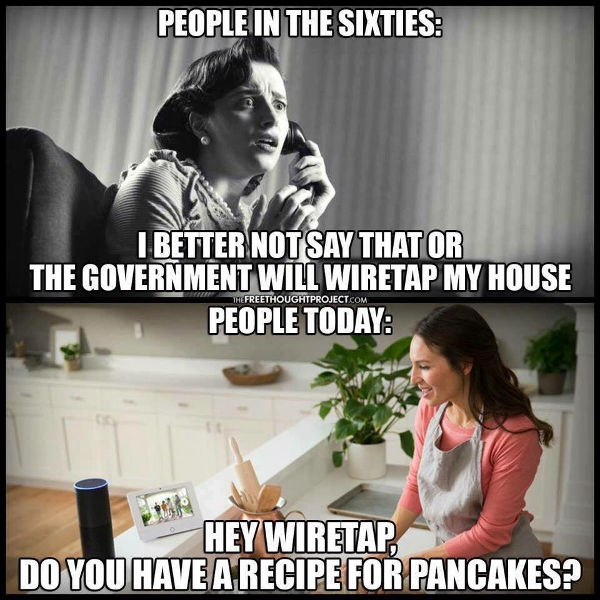 Instead of the deep state government forcing cameras and microphones on the public by force, the public is shelling out hard earned money from their own pockets for the hardware, then installing it themselves. All in the name of “convenience,” and “security.” The main use of digital doorbells seems to be catching “porch pirates” in the act.

As more and more families embrace the technology of doorbell video cameras, police departments are tapping the video feeds. It’s what hardware maker Ring calls “The New Neighborhood Watch.” The Police Department of Woodfin, North Carolina, is thrilled. “We are the first in the area to take this partnership and we see it again as information sharing, and that’s really the crux of our job when it comes to solving crime.”

The public can also tap into the camera network, but not live feeds. With the Neighbors app, a screen pops up with all the nearby reports of suspicious activity. You tell it what part of town to focus in on. When you see something that happened nearby, you can look at the footage to see if you might have information to add. It also alerts you to potential threats.

There’s always a downside with privacy invading technology. A lot of what’s reported is exaggeration, racism, general bigotry, and other issues. For example. One homeowner was totally freaked out when his doorbell spied “a man dressed in a camo hoodie with a shopping bag at his side,” walking up to the door. The stranger “didn’t stay long, and didn’t do much of anything,” but that didn’t stop the resident from titling the video “Suspicious Male.”

After the clip got over 2,000 views, the subject was frantic to turn himself in. He’d “lived in the house a decade earlier,” he wrote as a comment under the video. After “feeling unexpected pangs of nostalgia while doing some holiday shopping in the neighborhood,” he decided to stop and ring the bell. “I used to play with my dog in the backyard,” he wrote. “I had a lot of good memories there.” It doesn’t look like he’ll ever try that again.

You can view some of Ring’s more interesting videos here.