A heroic deputy lifts a car off a woman captured in a heart-pounding video of a terrible crash. And his tremendous act of heroism in this positive news story is earning this Deputy so much applause!

Gloucester County Sheriff’s Deputy Jon Holt jumped into superhero mode after he saw an out-of-control car flip over last May.

According to ABC News report:

The incident occurred on May 7 in Gloucester County, Virginia, when Deputy Jon Holt was responding to a report of an overturned vehicle with an entrapment, according to a statement from the Gloucester County Sheriff’s Office. The video was released by authorities on May 18.

“The driver was laying underneath the vehicle with her head pinned by the sunroof,” the Gloucester County Sheriff’s Office statement read. “Seeing the trauma her child was witnessing, Deputy J. Holt went into overdrive.”

A child whose identity has been blurred from the video can be seen inside the vehicle crying and pleading with the officer to help their mother. 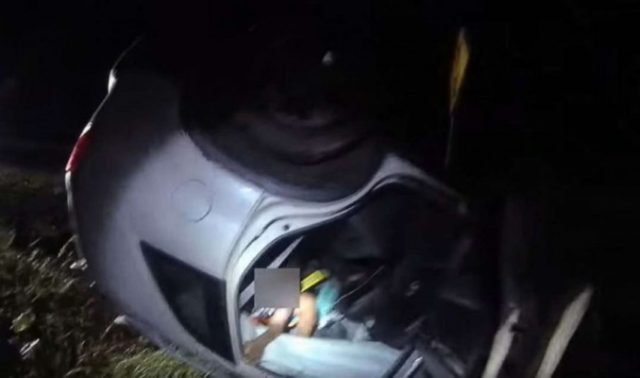 The video footage has since been shared on social media by the Gloucester County Sheriff’s Office, and it quickly went viral for good reason.

Be forewarned, however, it may be difficult for some viewers to watch:

The time is running out for Holt, he knew he was on his own, so he got the child out of the car and then did the only thing he could think to do. He decided to lift the overturned car to free the woman, who was pinned underneath. And, that’s exactly what he set out to do as his body camera video faded to black and the only sound heard is Deputy Holt using all of his strength and might to lift the vehicle.

“At that point, I put my shoulder into the doorframe and braced as best I could, and I said, ‘All I have to do is just stand up.’ That’s what all I was telling myself.”

“At that point, with as much effort as I could, I tried to stand up and stood up enough so she could free herself and was able to start breathing,” he added.  Although his video had gone dark, his efforts were clear as he’s heard “straining and groaning loudly as he attempts to singlehandedly lift the car off of the woman.”

Miraculously, Deputy Jon Holt “was able to physically lift the vehicle up enough for the driver to maneuver her head out to safety,” according to the sheriff’s department. Indeed, Holt saved the woman’s life by singlehandedly lifting the car that she was pinned under, freeing the woman, who was reportedly “doing well” after the rescue. Last I knew that she was doing okay and you know, medical staff believed that she will be okay and released.”

Watch Deputy Holt said in the interview below:

Of course, the deputy, who has also served in the Virginia Army National Guard and served in Iraq, has since been hailed a hero with hundreds of people thanking him for his service and bravery, but he seems to prefer a different label for himself, saying he’s just your “average cop.” According to Deputy Holt, his heroic efforts are just part of his job.

“You know, I’m just the average cop, and you know, it’s what we do,” the humble officer said, adding that “thinking of doing anything different is, you know, out of the question.”

This isn’t the first time that Gloucester Sheriff’s Deputy Jon Holt rushed into a potentially dangerous situation in an effort to save lives. In March of 2020, Holt pulled two people from a burning house. He accepted “both the local and regional Top Cop Awards from the Greater Hampton Roads Regional Crime Line” for his “commitment to public safety,” according to his department, The Blaze reported.

If this officer isn’t a hero, I don’t know who is. But, perhaps he’s right too. Maybe he is just your “average cop” and bravery is just part of the job. It’s definitely a quality many law enforcement officers have, but they seldom get enough credit for it. Instead of focusing our attention on the bad apples in the bunch, it’s news like this that is worthy of being shared.