This woman from Washington wanted to give her dogs a treat, a special New Year’s Eve dinner for her four pugs but the woman says after eating their treat, her beloved dogs got deathly ill. 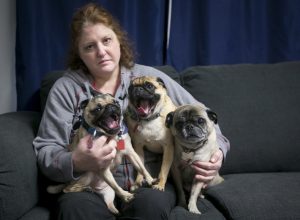 It was New Year’s Eve, and one of her dogs, Tinkerbell, had just had surgery to remove a cyst from her bladder, so Mael, 43, of Washougal went to the pet store and bought them Evanger’s Hunk of Beef dog food. Within 15 minutes of eating the food, her four pugs — Tinkerbell, 3, Tank, 10, Tito, 2, and Talula, 12 — and her daughter’s dog, Pedro, 10, started acting odd, Mael said.

“I fed them one can and within fifteen minutes they were acting drunk, walking around, then they couldn’t walk and were falling over,” Mael said. “I grabbed them all and I took them to the emergency vet and when I got them there they were limp. They weren’t moving or anything.”

Nikki picked up the last of the survivors Tito Monday morning but Talula died.

She immediately sent the dog food to a lab to investigate what exactly killed her dog and the results were stunning.

CBS 12 ran the tests and found that the sample contained pentobarbital, typically used to euthanize pets rather than feed them.

“Nobody should have to go through what we went through,” Nikki Mael told CBS 12.

Once the Gravy Train also tested positive for the deadly ingredient, CBS 12 knew that they had to get the word out immediately about these grave concerns.

The FDA has also issued a warning about pet food containing pentobarbital, describing the symptoms as, “drowsiness, dizziness, excitement, loss of balance, nausea, nystagmus, and inability to stand. Consuming high levels of pentobarbital can cause coma and death.”

J.M. Smucker released a statement, claiming the “root cause to be a single supplier and a single, minor ingredient, used at one manufacturing facility.”

And they now recalled shipments of Gravy Train, Kibbles ‘N Bits, Ol’ Roy, and Skippy canned dog food. Unfortunately, those pet owners don’t consider the lives of their beloved animals to be, “minor.”

“Above all, we are a company that loves pets and understands the responsibility we have in providing high-quality food for the pets our consumers love,” the statement continued.

If you have a pet, please check your cabinets for any of these products and dispose of them immediately before they suffer the same fate as poor Talula. And the only way to counter this terrible company’s mistakes is to stop buying their pet food.

These loving creatures deserve to eat safe and healthy foods!