Right-Wing Activists with Patriot Front recently launched a nationwide campaign to promote their America first agenda. As part of that effort, they hung over thirty banners from overpasses and glued posters on signposts in 13 states.

The ones they hung in New York scared the progressive locals so bad, that they all had to run for a safe space and some fresh Play-Doh. The one that graced Grand Central Station read “Life Liberty Victory.” Some of the others scattered around the area included, Revolution Is Tradition, America Is Not For Sale, Deport Them All, United We Stand, and Reclaim America.

One snowflake couldn’t believe that fellow New Yorkers would dare to agree. “It was truly disappointing to see a few neighbors dismissing these incursions.” They were asking, “what was so wrong with the generic, patriotic catchphrases?”

Liberals are convinced that every “white nationalist” is a fascist Nazi, but that just isn’t true. Not everyone who considers themselves a white nationalist agrees with all the rhetoric some groups promote. Being proud of your heritage, culture, and country shouldn’t be considered a hate crime just because your heritage happens to be white. All the other colors of the rainbow can be proud to be American too, which is all that “nationalist” means. 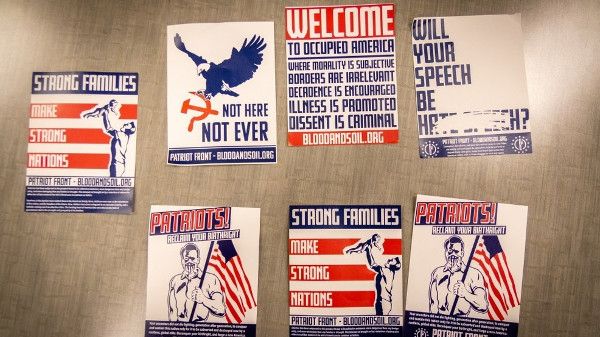 “Every effort in furtherance of the goals of national sovereignty is a testament to the existence of the nation’s continued fight for life itself,” they write on their website. “No collective of men should exist without liberty to temper their union, and union to balance out their liberty.”

Being an American is an attitude, not an accident of birth. You can be born in America without feeling part of the culture and you can come from another country and sing our praises from the rooftops.

One of the things that made America Great in the first place, was the fact it was a melting pot. It absorbed the best all the other countries have to offer and turned it into a unique culture. For two-and-a-half centuries, people of all races and religions have fought and died to defend that unique culture. Now, we have chunks that won’t melt. Each faction wants it’s own special privileges.