According to the watchdog group Accuracy In Media, Elizabeth “Pocahontas” Warren gets a big bold “FALSE” plastered against her promise to “treat truth as something that matters.” No she won’t, AIM determines. She hasn’t in the past and there isn’t any indication she’s about to change.

Responding to an endorsement that the Des Moines Register printed in an editorial, the fact-checkers write, “the endorsement missed an important piece of information: Warren has trouble keeping her stories straight, if not being dishonest to both the media and potential voters.”

The Register praised Warren for defecting from the Republican party and the great job she did setting up a slush fund for the Democrats officially known as the Consumer Finance Protection Bureau. The endorsement failed to mention Warren’s claims to be a Native American, therefore a minority entitled to special privileges. When challenged on the issue, her DNA test revealed her spurious claim to only be 1/1024th true.

After that public relations disaster, she had to make a formal apology to “Native American tribes for assuming that a DNA test would admit her into a tribe.” Notice how neatly she sidestepped admitting that she lied. “This does not cover her self-identification as a minority while working as a professor at the University of Pennsylvania and at Harvard University,” AIM writes.

When she was caught lying about her own family, her relatives turned against her. She said her father was a janitor, “an account disputed by a family member.” Then she “claimed she was fired for being pregnant.” Not true, she quit because, as she said in a long forgotten interview, “she chose not to work in that job anymore.”

Warren’s biggest and most damaging dishonesty centers around what she considers her biggest accomplishment, The Consumer Finance Protection Bureau. The amount of power Warren gave to whoever sits in the director’s chair is so scary that President Trump’s appointee demanded it be disbanded or re-regulated.

It was a fight to drag the chair out from under the Democrat who had been warming it. When he finally got a look into the file cabinets, Mick Mulvaney went ballistic. It turned out to be nothing but a slush fund intended specifically to benefit progressives. Quoting James Madison, he made a scathing report on Warren’s handiwork back to the administration. 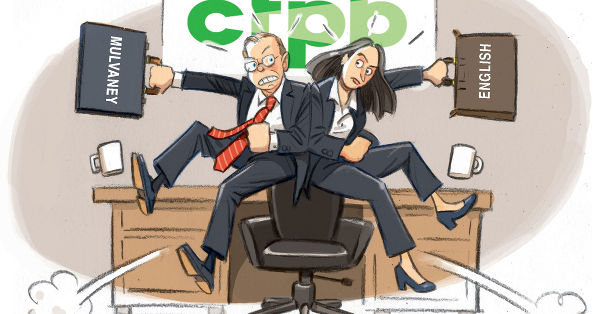 His agency’s concentration of “legislative, executive, and judiciary power,” he writes, “may justly be pronounced the very definition of tyranny. The structure and powers of this agency are not something the Founders and Framers would recognize.”

The way Warren set it up, “I am the judge, I am the jury, and I am the executioner in some of these investigations, and that is completely wrong. If you don’t like it, “talk to the person who wrote the statute.” The CFPB Director has three different and powerful jobs at the same time, making the director a “one-man legislature” allowed to “write rules to bind parties in new ways.”

Even the president has very little say. Any time there’s a dispute, the director has final say over “in-house court-like adjudications.” He promised at the time to do as little as possible because of the danger. “The best that any Bureau Director can do on his own is to fulfill his responsibilities with humility and prudence, and to temper his decisions with the knowledge that the power he wields could all too easily be used to harm consumers, destroy businesses, or arbitrarily remake American financial markets.”

The official job of the independent agency is “to protect consumers from predatory lending and financial abuse.” When Mulvaney took over, he found out that its real function is to act as a slush fund. Particularly as a democrat slush fund.

The CFPB collected arbitrary “fines” from banks and other financial institutions, meant to be passed along to poor “victims.” The victims got pennies while millions of dollars “set aside for the education funding” to “educate the public on its mission,” were spent hiring democrat businesses.

For instance, $14 million went to the “powerful media consulting shop that has produced political ads for Obama and 2016 runner-up Hillary Rodham Clinton.”

The Competitive Enterprise Institute called CFPB “a Democratic Party donor bank, with its bureaucrats writing checks to liberals at a rate of 593 to 1 Republican, including $46,611 to Clinton, $13,190 to Warren, and $19,988 to Obama.” So much money built up in the slush fund that Acting Director Mulvaney didn’t need funding for that quarter’s budget.

Instead of “pushing an unequal America in the right direction,” as the endorsement insists, Warren will bring only socialized medicine and climate change restrictions, along with the vastly higher taxes to pay for the Utopian schemes.