The Federal Bureau of Instigation is working hard to polish their tarnished reputation with the American public. After the way they managed to botch one high profile investigation after another for the past few years, while intentionally deceiving the FISA court to overthrow the President at the same time, their opinion in the eyes of voters can’t get much lower.

The bureau has an opportunity to redeem themselves with the investigation into Minnesota Congresswoman Ilhan Omar. As promised, they reached out to the other departments with jurisdiction over the alleged crimes. It’s quite a list. One reporter describes it as “perhaps the most extensive spree of illegal misconduct committed by a House member in American history.”

Since October, based on the information turned over to the feds, Omar’s alleged crimes are being investigated by the Department of Education and Immigration and Customs Enforcement, in addition to the FBI investigation.

After Minnesota state Representative Steve Drazkowski filed a complaint with his District’s Department of Justice, U.S. Attorney Erica MacDonald turned it over to the FBI for investigation. The special agent in charge met with Rep. Drazkowski in October “to receive a prepared file of evidence and related information.”

The FBI explained in the beginning that “the evidence against Rep. Omar may lead the FBI to expand the review to other federal departments.” When that happens, the FBI shares evidence and coordinates the joint investigation. Since then, the Inspector General for the Department of Education started looking into student loan fraud and Immigration and Customs Enforcement opened a “possible criminal investigation.” 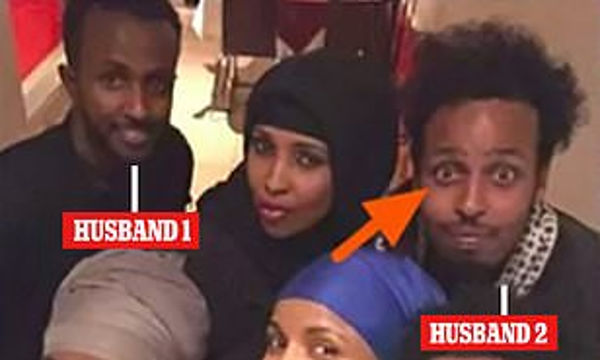 When Omar married the man alleged to be her brother, a British citizen, in 2009, it “may have been an attempt to facilitate federal student loan fraud, or other fraud involving higher education.” Right after they got married, the happy couple settled down in fabulous Fargo, North Dakota. Omar enrolled in the state university and her husband signed up the next year.

Omar got her degree in June of 2011. Within days, “she and her husband then permanently separated.” By a strange coincidence, the start and end dates of the marriage line up perfectly with Omar’s enrollment dates at North Dakota State University. Based on public records and a statement made personally by Omar, the whole time she was married to Ahmed Elmi, she was still living with her first husband and their kids. That sounds a lot like bigamy.

When she got divorced from Elmi in 2017, she filed a document “under penalty of perjury.” She lied on eight out of nine questions for eight counts of perjury. She claimed to have “lost all contact” with Elmi in June 2011 when she graduated but her “social media posts, photos, and even a 2016 interview with the NDSU husband indicate otherwise.”

You’ve seen the evidence showing @IlhanMN — while divorcing Ahmed Elmi in 2017 — perjured herself 8 times on a 9-question document.

Yet you might not have seen the *other* court document.

It shows strong evidence of Ilhan’s *motive* for perjury. (1/x)

ICE is giving Omar the chills because they’re looking at “a breathtaking number of possible immigration-related felonies,” the Blaze reports. Besides the perjury, there is potential “immigration fraud, marriage fraud, up to eight years of state and federal tax fraud, two years of federal student loan fraud, and even bigamy.”

There is a laundry list of documents, public records, photos, and sworn statements that provide “smoking gun” evidence that she married her brother. He was raised in the same home as her sister and has “the same three family names.”