Democrats are doing the best they can to defeat President Donald Trump in November, considering that all their hopes are now riding on Joe Biden. Hillary Clinton threw her powerful Deep State black magic behind Barack Obama’s former Vice President on Tuesday, but at least she won’t be his running-mate.

Biden may not be much but he’s all they have

Biden won what amounted to a “war of attrition” as one by one, the other candidates fell by the wayside. Bernie Sanders gets irate whenever anyone suggests that he dropped out. “That’s a lie!” Bernie insists, his campaign was simply “suspended” that way his followers can rack up some delegates to shift platform policy a lot further left of center than Biden’s willing to go.

Moderate Democrats don’t want revolution but they’re desperate for a regime change. One by one all their Saul Alinsky style gains that took decades to put in place have been ripped out by their radical roots since President Trump took over.

Hillary already promised to back the last person standing, no matter who it was, but she was keeping her fingers crossed behind her back hoping it wouldn’t be Bernie Sanders. There’s no love lost between them and it’s obvious. At least she used to have breakfast with Biden once in a while when she was Secretary of State. She officially offered her endorsement today. 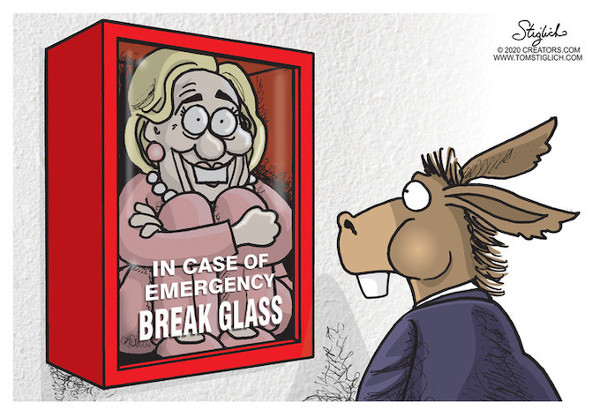 She won’t be named Vice President

It’s obvious that Democrats are desperate to win this election. Every one of their principles are on the line. Donald Trump has managed to throw a monkey wrench into every one of their New World Order schemes. Biden is on record saying that he intends to name a female for the slot, to appease the radical progressives.

Many Democrats were secretly hoping that despite Hillary’s denials that she would consider the job, she might agree to take it in order to aid their chances for a win. It didn’t happen, at least not yet.

Hillary joined Biden on stage for an online “Town Hall” event. The focus of the program was “the impacts of the novel coronavirus on women.” That’s because women “are expected to play a critical role in the most competitive swing states,” Reuters writes. Even Democrats admit, it’s “expected to be a tight election rematch.”

Democrats still can’t get the taste of the 2016 election out of their mouths, Clinton has become such a powerful force in the party that her loss “is still the source of anger and consternation among many liberals.” Republicans are itching for battle. “There is no greater concentration of Democrat establishment than Joe Biden and Hillary Clinton together. President Trump beat her once and now he’ll beat her chosen candidate,” Brad Parscale insists. Biden kind of likes being beat up.