The couple of times that I have made a point to go out since all of this stuff has gone down with the coronavirus, I have tried as hard as I can to make sure that I don’t exactly get too close to anyone.

Also, it is the reason why I am happy that they have suspended sports for the time being because if you look at most sports stadiums, people are sat right next to each other with no separation in some cases.

It is so easy in a packed area to spread an illness the way that they are talking about. Which is why when I hear someone talking about wanting to congregate in a large space with a lot of people I begin to wonder if the people that are throwing caution to the wind even have a clue.

The Australian government has warned people to keep their distance as the coronavirus pandemic worsens – but thousands completely ignored this advice as they enjoyed a scorching day at the beach on Friday.

Sunbathers at Bondi Beach in Sydney, New South Wales looked like they didn’t have a care in the world as they frolicked in the sea yesterday, despite Covid-19 infecting almost 1,000 people across the country.

It comes after Prime Minister Scott Morrison announced that people should keep 1.5 metres away from others while outside. The politician said for gatherings of less than 100, there should be four square metres provided per person in an enclosed space  – two metres by two metres. 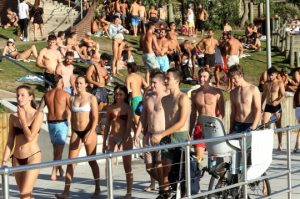 He added: ‘So for example, if you’ve got a room, if you’ve got a premises, if you’ve got a meeting room or something like that, that is 100 square metres, then you can have 25 people in that room. ‘Now, in addition to that, you should continue to practise wherever possible the 1 metre or 1.5 metres of healthy distance between each of us, to ensure that we are limiting the contact and limiting the potential for the spread of the virus.’ 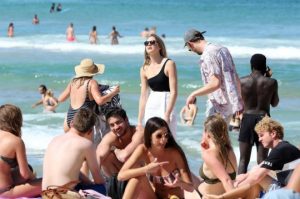 After hearing beachgoers had not taken the new guidelines seriously, South Wales Health Minister Brad Hazzard reminded Australians that ‘we are in a different time’.

He said people were ‘by all means’ to enjoy the beach and other outdoor areas, but to keep to the health guidelines. Mr Hazzard told crowds: ‘We are in a different time. We need to behave in different ways and that is to keep your distance. ‘The recommendation is at least 1.5 metres. That is a sensible recommendation that people should sensibly take on board.’ The health minister also issued a similar warning to churchgoers, saying nobody had seemed aware of the need to socially separate when he attended a recent service.