The Democratic candidates, President Trump told CPAC, are nothing but a bunch of looters and moochers who want to take everything you have, from your money to your freedom. He promises that his administration “will never let them do that.” Along with emphasizing his practical response to the coronavirus threat, he assures America that the “far-left radicals” won’t be allowed to turn our prosperous nation into “a large-scale Venezuela.”

President Donald Trump gave a rousing performance at this year’s Conservative Political Action Conference. He arrived on stage shortly after his White House press conference introducing the Coronavirus Task Force, headed by Vice-President Mike Pence. The administration, he told those who missed the briefing, “has taken the most aggressive action in modern history to control our borders and protect Americans from the coronavirus.” Part of that is “travel restrictions on Iran and screenings on passengers from Italy and South Korea.” We’re also ramping up production of masks and protective gear. The most important thing though, the President stresses, is to stay calm.

The last thing we need, The president noted, is Nancy Pelosi and Chuck Schumer screaming in panic and running around in circles. Their chicken little approach is “a hoax.” We fully expect more cases. The important things to remember are first, this isn’t Ebola. Nearly everyone will experience no more than a case of the flu. Second, it’s a lot like putting out a forest fire. You contain it and let the flare-ups burn themselves out. Have patience and let the stock markets take care of themselves. They will recover in time. 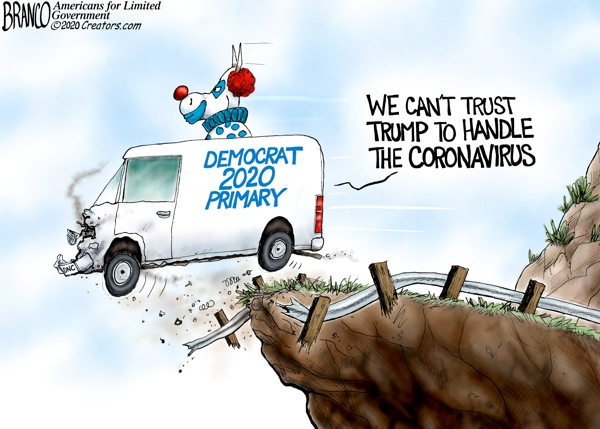 President Trump also took a moment to proudly mention that earlier in the day a peace deal was signed between us and the Taliban, bringing us one step closer to bringing our troops home from Afghanistan. He hopes to be the one responsible for ending the longest war in America’s history. “American forces cannot be the police for the entire world,” Trump declared. “Today the United States signed a deal with the Taliban so that we can hopefully begin the immediate process of finally bringing our troops back home.”

“Together we’re defeating the radical socialist Democrats, the fake news media, the crooked politicians and the hate-filled left-wing mob.”