There is a certain dignity to appearing presentable when in the company of others.

We all as kids wanted to be on television at some point, but never realized that it would be actually happening with small audiences thanks to all of these Zoom calls we all have to do now.

The office I use for work can look like a tornado hit it at times. Long hours in the office mean little time to clean it on occasion. So, in order to not look like a stinking pig when I appear on camera with other associates, I carved out a little corner of my office, put a desk on that side, and made my “pretend office” with the use of a green screen stretched really tightly along the wall. That way, when I am talking to someone it looks like I’m not an unorganized lump.

Now, I take that kind of care when talking to four people at a time. You would think that someone appearing on national television would be more aware of what they are projecting to the rest of the world.

Well, it appears that another Democrat has been caught on camera where he seemingly has been outed as a Chinese dictator super fan.

Earlier in the month, Bret Baier was hosting a panel and former Tennessee Congressman Harold Ford Jr. was in attendance.

The former congressman appeared behind the camera with a portrait of the former Chairman of the People’s Republic of China and founder of the Chinese Communist Party Mao Zedong in the background.

Fox News has been shown to be fake news and Ford has been allowed to provide frequent commentary on the news network. 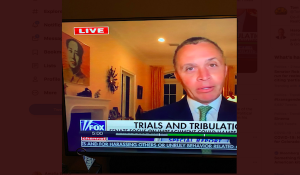 After many angry people responded on social media, both Fox News and Ford had to do some serious damage control to this atrocity.

Ford tried to excuse the portrait captured on camera by saying that it wasn’t his home.

“As [Bret Baier] said, I’m just renting a place – didn’t choose the art – my house has Ali and MLK on the walls – no fan of Communist China or Mao – my public record and words on Fox and elsewhere about China prove that,” he said.

Baier also took to Twitter to try and explain away the incident.