A school board member in Virginia posted a meme about Muslims on her personal Facebook page now Muslims are outraged! 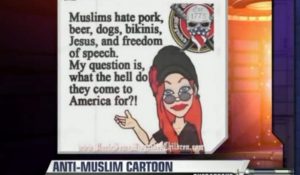 Chesapeake School Board Chairwoman Christie New Craig posted a meme about Muslims on her personal Facebook page, being a little tongue-n-cheek. Looking at the meme, it has some truth to it, but that’s what makes jokes funny right? The truth there is to it. The Muslim community didn’t find it funny and all hell has broken out since.

When questioned by reporters at The Virginian-Pilot, Craig maintained that she did not share the cartoon “maliciously.”  “I merely shared it,” she told WAVY-TV. “I did not make a comment, and I’m just shocked with everything going on in our country — police officers are losing their lives, people are homeless and people don’t have jobs — that a political cartoon would cause this much stir.”

And yet it created so much controversy that the Council on American-Islamic Relations accused Craig of propagating “anti-Muslim bigotry” and demanded that school board members investigate her post.

The council said that they need to address the issue in order to uphold it’s values “to the principle of equal opportunity for all and does not permit discrimination or harassment on the basis of race, color, national origin, religion, sex, age, disability, military or veteran status, genetic information, or any other characteristic protected by applicable law.”

The truth is, CAIR has been identified by the FBI over the last few years as a terrorist organization due to their support of other terror groups. But our past administration treated them like they were a vital part of the U.S…. They are not. They are individuals hell bent on taking over the American way of life. Time that these types of groups are removed from the U.S.