President Donald Trump’s administration announced sweeping reforms that would toss Michelle Obama’s lunch rule lunacy into the trash, instead of all those wasted veggies. They claim they didn’t strategically break the news on Michelle’s birthday, that was just a coincidence.

I’ve been fighting alongside @MichelleObama for years to bring healthier lunches into schools. Now, on her birthday, Trump is rolling back her healthy lunch initiative.
This is shameful. Students shouldn’t suffer just because of Trump’s pettiness. https://t.co/UFN7g0Cehl

During Barry Soetoro’s regime, schools were required to practically stuff fruits and vegetables down student’s throats, whether they wanted them or not. It was so ridiculous that congress was forced to re-categorize pizza as a vegetable to keep the kiddies from starting riots.

“We are outraged that Congress is seriously considering language that would effectively categorize pizza as a vegetable in the school lunch program,” Amy Dawson Taggart, the director of a liberal advocacy group at the time, “It doesn’t take an advanced degree in nutrition to call this a national disgrace.” 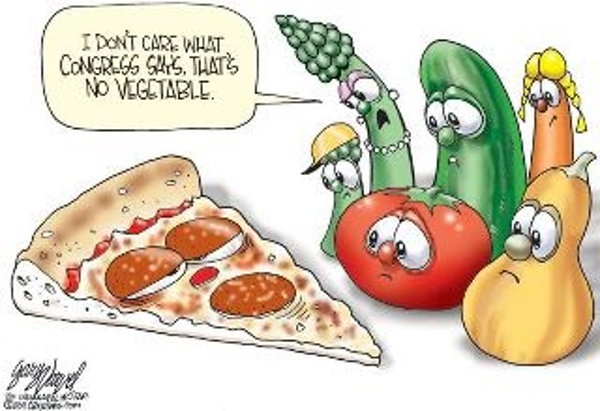 President Trump just restored the sanity. “Schools and school districts continue to tell us that there is still too much food waste,” Agriculture Secretary Sonny Perdue explains. “More common-sense flexibility is needed to provide students nutritious and appetizing meals.”

Students and faculty were equally frustrated over Michelle Obama’s socialistic policy. “We listened and now we’re getting to work,” Purdue declared.

Kids will still get the appropriate amount of fruits and vegetables, there will just be a lot more flexibility and variety. “This is not about politics; this is about serving children well,” a USDA spokesperson told Time. “These rules are a direct response to what has been shared with us by those who look these children in the eye every day, building on their feedback to introduce effective next steps that will ensure children get the nutrition they need to be successful.”

The statement clarifies that the new policy “would continue to require every vegetable subgroup to be served.” Also, “the amount of dark green vegetables that must be served each week did not change.”

What does change is “the serving sizes for some subgroups to make them consistent, provide more flexibility to operators, and reduce waste.”

Under the Obama rules, a fifth of the food was going right into the trash.