Sometimes, Eduardo Moreno told his arresting officer, “you just get a little snap.” The 44 year old train engineer working at the Port of Los Angeles went loco on Tuesday over the hospital ship USNS Mercy which was conveniently parked directly in front of the end of his train track. He’s facing federal charges for intentionally derailing a train.

The engineer had a message for America

According to the affidavits attached to his arrest report, Moreno told investigators he was “suspicious” of the hospital ship sent to take trauma cases off the hands of overburdened Los Angeles hospitals. He believes it has some evil “alternate purpose related to Covid-19 or a government takeover.” He took action out of a misguided desire to “wake people up.”

A video from inside the cab of the train allegedly shows the engineer signal the start of his rampage by igniting a road flare. He then “put the train in full speed and held his hand toward the camera with his middle finger raised.”

Right about then, a motorcycle officer with the California Highway Patrol was cruising along Harbor Avenue. The last thing officer Dillon Eckerfield expected to see was “a freight train flying off the end of the tracks.

According to Eckerfield’s report, with no sign of slowing down, the runaway locomotive smashed through the concrete and steel barricades beyond the end of the tracks then barreled through a chain link fence, across a parking lot, then a gravel lot, and another fence before dragging to a stop. It never got anywhere remotely close to the ship. 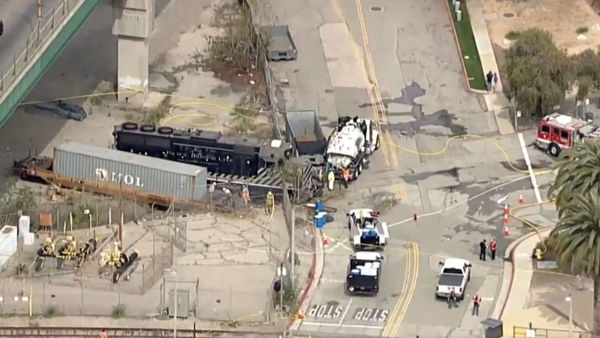 Hard to hide with a bright yellow vest on

The officer instantly responded to the crash. His report notes that the fleeing suspect was “easy to follow” because the engineer was wearing “a bright yellow florescent vest” as he jumped from the cab and started running. Officer Eckerfield headed him off. As the maniac approached, the officer drew his weapon and ordered Moreno to the ground.

Mr. Moreno waived his right to silence, boasting “you only get this chance once. The whole world is watching.” It was something Moreno just had to do, he told police he’s fed up with government lies. “I had to. People don’t know what’s going on here. Now they will.” Moreno is “suspicious of the USNS Mercy” and officials are lying about why it’s really here. Staring at the hospital ship directly in front of him got him started “putting the pieces together.”

He admitted it was kind of fun. “Sometimes you just get a little snap and man, it was fricking exciting… I just had it and I was committed. I just went for it, I had one chance.” The “substantial fuel leak” was cleaned up by the LAFD.

He later told the FBI his day started out normal and “no one was pushing my buttons.” He swears up and down it wasn’t something he planned. “He said he hadn’t spoken to anyone about wrecking a train, and didn’t even plan it himself until the idea came to him spontaneously that afternoon.” Moreno told the FBI, “I can’t wait to see the video.”

Moreno is formally charged with train wrecking in federal court and faces up to a maximum of 20 years in prison. There was only a single car attached to the hijacked locomotive. Pacific Harbor Line, owner of the train, issued a statement. “Thankfully there were no injuries,” Stefan Friedman announced. “The engineer of the train has been arrested and charged, and we are fully cooperating with all authorities as they proceed with their investigation.”